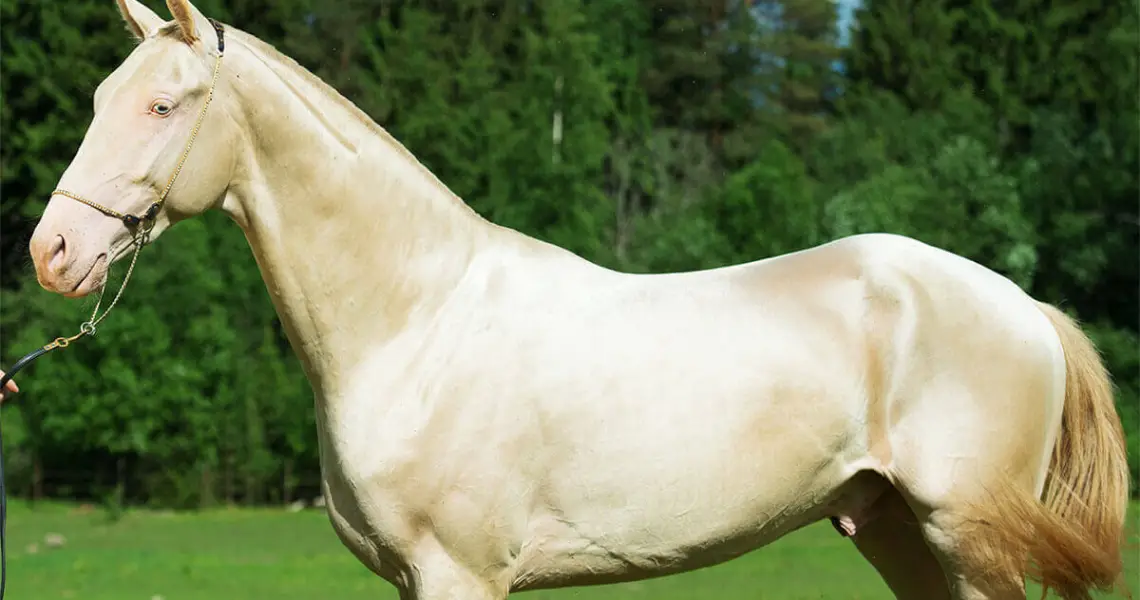 The Akhal-Teke is a unique horse breed that originated in Turkmenistan.

They are known for their smooth gaits, athleticism, and beauty.

If you’re thinking of adding an Akhal-Teke to your stable, there are some things you need to know first.

In this blog post, we’ll cover everything you need to know about this fascinating breed.

Read on to learn more!

Here are some of the key things you need to know about the Akhal-Teke horse:

The Turkoman horse, also known as the Turkmene, was an Oriental horse breed that originated in the steppes of the Turkmen desert.

The Akhal-Teke is regarded to be its closest modern descendent.

The Turkoman horse is thought to be extinct, although a strain that is extremely similar to it may still be bred in Iran today.

Thousands of years ago, this horse was one of four varieties of horse that crossed the Bering Strait from North America to Russia and Central Asia.

Since the Middle Ages, Turkmen tribes have been purposely breeding the Akhal-Teke to be a lithe and quick riding horse.

They were also used to improve and develop a large number of other breeds, and although it is still a matter of heated debate as to which breed came first – the Arabian or the Akhal-Teke – the genetics of these two breeds, as well as the Barb, point indisputably to a common ancestor.

In the year 1881, Turkmenia was annexed by the Russian Empire, and shortly afterwards, the horses native to this area were given the name Akhal-Tekes.

The oasis around which these horses were mostly bred was known as Akhal, and the tribe that resided there was known as Teke.

However, they were also called as ‘argamaks’ in Russia, where they were particularly popular for the next two centuries.

The Orlov Trotter and Don owe a lot to this breed’s influence.

In an attempt to improve the Akhal-Teke’s size and speed at the beginning of the 20th century, Thoroughbred blood was added.

However, this practice was quickly abandoned because of a now-famous race from Ashgabat (the capital of modern Turkmenistan) to Moscow in 1935 that demonstrated that purebred Akhal-Tekes performed much better than their crossbred competitors.

The horses covered 2,580 miles (4,152 kilometers) in only 84 days during what is perhaps the most difficult endurance race of all times – which included three days without any water.

Over the course of almost three months, they covered an average daily distance of 34 miles (49 kilometers), through harsh mountain terrain and the Karakum Desert.

It is thought to be one of the oldest horse breeds present today.

They are not considered having an easy personality, so only people with prior horse experience should consider getting an Akhal Teke.

They are depicted on Turkmenistan’s coat of arms, stamps, and money, and are a source of national pride.

Akhal Teke horses were very valuable to Turkmen tribes since they were used for raiding, which was vital to their survival.

They bred the horses carefully, kept track of their progress verbally, and trained them in specified ways.

Before attacks, the animals were fed sparingly to get them used to the harsh desert environment.

The Russians referred to these horses as Argamaks, which translates to holy or heavenly horses.

The Akhal Teke stallion Absent, known for his agility, won the dressage competition at the Summer Olympics in 1960 in Rome.

They are not regarded to be the most friendly or easy to train.

The Akhal-Teke horse is exceptionally resilient and can thrive in environments that are either extremely cold or extremely hot.

They can also cope with limited access to water and food.

They possess superior stamina, speed, and agility, and are very elegant and exotic because of their slim figure, which can be compared to that of a cheetah or a greyhound.

Their heads are elongated and narrow, with forward-set ears.

While their hooves may be small, they are extremely hard.

Their mane and tail are sparse, and they have no feathering on their feet.

With almond-shaped, frequently hooded eyes, tall, narrow ears, and big nostrils in a typically convex profile, the face and head are made to withstand quick running and sandstorms.

Their long back is connected to a flat yet deep rib cage and a robust croup.

They have sloping shoulders and well-muscled hindquarters, and also smooth, ‘floating’ movements due to their flexibility and elasticity.

Although they may be any color, gold and black are the most common.

However, any color and any markings are acceptable according to the standards of the breed registry.

Many of these horses have a gene cream dilution, which creates palomino, perlino, and cremello coats.

Their hair lacks the opaque center seen in other horse hair, and the result is that the coat will refracts light, creating the appearance that it is glowing.

There are several health issues associated with Akhal Teke horses as a result of the lack of genetic diversity within the breed.

Cervical vertebral malformation, cryptorchidism, and naked foal syndrome are the most common.

The horses are born with the condition.

When it comes to bonding with people, this breed has a reputation for being a “one-person horse”.

Due to the fact that Akhal Teke Horses were bred in the desert, their dietary and nutritional requirements are not as high as those of other breeds.

To survive in the harsh desert climate, this breed has historically required a lot of protein in their diet.