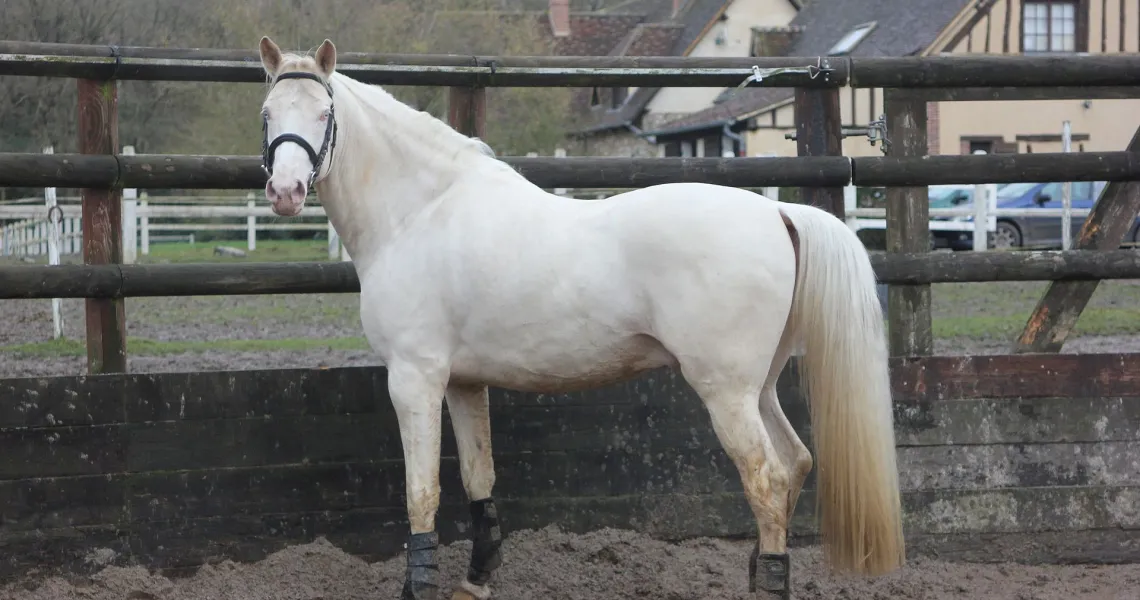 To no surprise, the main physical characteristic of the American Albino is a white coat, white tail and mane, pink skin, and black, brown, or dark blue eyes. Outside of coloration, the American Albino is separated into a stock type horse, saddle horse type, and Arabian type, with separate categories for ponies.

Because the American Albino is actually a color breed, it can carry the characteristics of its sires, whether Quarter horse, Arabian, Morgan, or Thoroughbred. For the most part they are known to be smart, tractable and even tempered.

While the „albino“ is a color and not a breed, the Albino, or white horse, has been given a registry in America. In days of old, white horses were reserved for queens and kings, the bravest knights, Indian chiefs and so on. Riding a pure white horse was a sign of high position or affluence. White horses were described in folklore and portrayed in early art as animals of tremendous endurance and beauty.

The American Albino Horse Association represents horses that are white. It was started to recognize offspring of a single white stallion named Old King, who had the reputation of producing many pink-skinned, white foals from solid-colored mares. Old King was purchased in 1918 and taken to a ranch in Naper, Nebraska. It was assumed that he was of Arab-Morgan ancestry, due to his conformation.

From 1918 to 1936, Caleb and Hudson Thompson, his owners started their venture with a herd of Morgan-bred mares to produce a breed of all-white horses. In 1936, they realized the need for a recording system wherein breeding records could be maintained for future guidance in their breeding program.

Even still, the qualification of dark eyes requires parents who carry genes for off-color coats, thereby creating a 5 percent chance that the off-spring will carry some off-color.

Lethal white syndrome is a genetic disorder linked to the “Frame” gene and most closely studied in the American Paint Horse. Affected foals are carried to term and at birth appear normal, though they have pink-skinned all-white or nearly-white coats and blue eyes.

However, the colon of these foals cannot function due to the absence of nerve cells, and the condition cannot be treated. Foals with Lethal White Syndrome invariably die of colic within 72 hours, and are usually humanely euthanized. Carriers of the gene, who are healthy and normal, can be identified by a DNA test. While carriers often exhibit the “frame overo” pattern, this is not a dispositive trait and testing is necessary, as the pattern can appear in a minimal form as normal white markings or be masked by other white spotting genes.

It is likely you have seen an American Albino. They are frequently used in circuses, fairs, movies, and advertising. What old-time Western movie would be complete without the good-guy riding his white horse into the sunset? Silver, the Lone Ranger’s horse, was an American Albino, as was Shiramyuki, the horse favored by Emperor Hirohito of Japan.