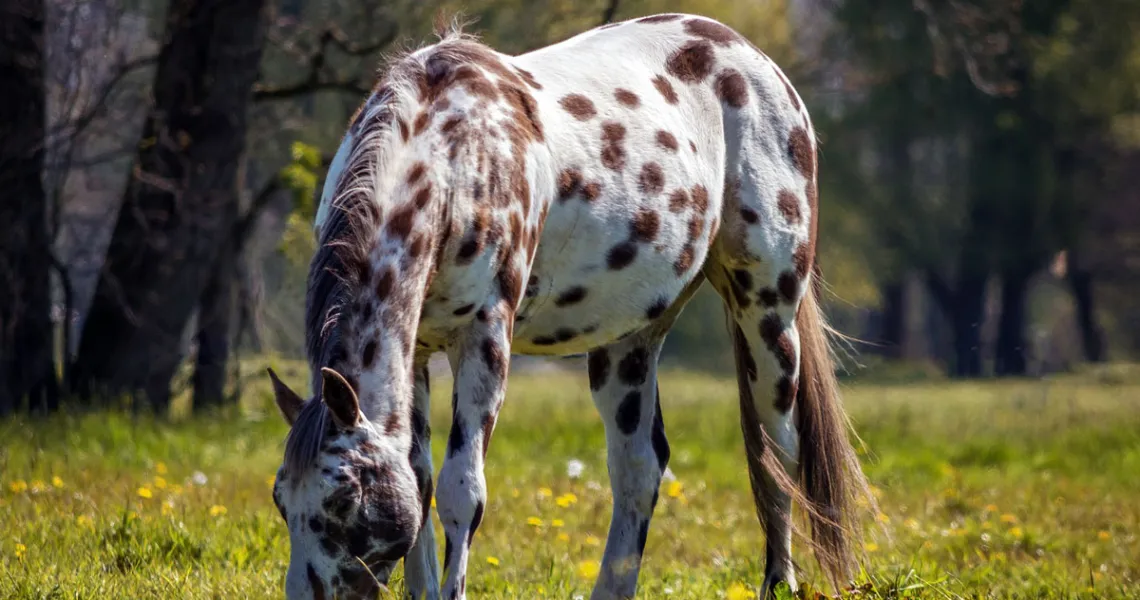 The Appaloosa is a breed of horse that is known for its distinctive coat colors.

They are considered a versatile breed and can be used for everything from trail riding to dressage.

Because they are so adaptable, the Appaloosa is a popular choice for many horse riders.

In this blog post we will tell you everything you need to know about the Appaloosa horse, including their history, personality traits, and how to care for them.

So if you are thinking of adding an Appaloosa to your stable, keep reading!

Here are some of the key things you need to know about the Appaloosa horse:

Spanish explorers brought predecessors of the Appaloosa horse breed to North America in the early 1600s.

These horses eventually found their way to the Pacific Northwest, where local indigenous people, notably the Nez Perce, developed a deep respect for the animals and started breeding them.

Their meticulous breeding procedures intended to produce a horse that was colorful, tractable, and intelligent.

It is possible that the name of the breed comes from the Palouse River region, which is where the Nez Perce people resided.

Originally known as Palouse horses, the name was eventually changed to Appaloosas.

During the late 1870s, when the United States government was trying to take over Native American land, the breed came perilously close to extinction.

Some members of the tribe managed to escape with their horses, but a significant number of the early Appaloosas were either stolen, lost, or killed.

During the 1930s, interest in the breed grew again, and the few horses that had survived built a new foundation for the breed.

The horse known as Knobby, who was born in 1918, is considered to be the founding sire of the Appaloosa breed that exists today.

Since his herd was unaffected by the U.S. government’s seizure, he was an essential contributor to the breed’s foundation stock.

Sundance was an Appaloosa stallion with leopard spots that was born in 1933.

His offspring have maintained his stunning coat pattern across the generations.

Sundance’s ancestry includes horses from both Thoroughbred and Mustang breeding.

Red Eagle, who was born in 1946, is another notable foundation stallion.

He was truly half Arabian, as it was standard practice to integrate other light horse breeds in the endeavor to reestablish the Appaloosa breed.

Red Eagle may be found in the pedigrees of many Appaloosas today.

This stallion was crucial in the creation of a large number of cutting and reining horses by breeding old-type Appaloosas with Arabian genetics.

In 1938, the Appaloosa Horse Club was established as a breed registration, and it has served as the governing body for the breed ever since.

The registry has subsequently grown to be one of the biggest in the world.

In the years after the founding of the Appaloosa Horse Club in 1938, a more modern breed of horse emerged as a result of the introduction of American Quarter Horse and Arabian genes.

Horses that were more suited to racing were created in the 1970s with the addition of Thoroughbred blood.

They tend to be very eager to please, which makes them a great horse breed for equestrians of all experience levels.

Compact and muscular build with sparse mane and tail.

The potential combinations of colors and markings are virtually limitless, giving each individual Appaloosa a distinct look.

But hardiness, agility and calm temperament are also valued traits.

The majority of these horses possess exceptional levels of endurance and power.

Many of today’s breeders aim to breed away from the feature known as “rat tail,” which results in modern Appaloosas having fuller manes and tails.

On the legs, you might find eel, pastern, ankle, half-pastern, coronet, stocking, half-stocking, and lightning marks.

The Appaloosa’s skin is mottled with white and dark patches of pigmentation that give the appearance of splotches.

These markings occur across the body in a few distinct patterns, depending on the horse’s genetic makeup.

Most representatives also have white sclera visible around the iris when the eye is in a normal position.

Moreover, the striping on the Appaloosa’s hooves is unusual among horses.

It runs vertically, with a distinct alternating pattern of dark and light on each hoof.

In addition, the Appaloosa’s sclera (the white portion of the eye that surrounds the iris) is visible.

Solid-colored Appaloosa horses may be “appendix registered” because they can carry the gene for a coat pattern but not exhibit that particular pattern themselves.

The Nez Perce tribe bred their horses for a variety of purposes, including transportation, hunting, and combat.

Although the breed has evolved, the contemporary Appaloosa remains a versatile horse.

It is used in working cattle and rodeo competitions, pleasure riding, long-distance trail riding, racing, and a variety of other Western and English riding sports and activities.

Additionally, the breed is often featured in movies and on television because of its unusual markings.

Appaloosas are prone to developing many types of eye issues.

Their eyes tend to water, which may attract flies and lead to infection or discomfort.

Additionally, in comparison to the majority of other breeds of horses, they have a higher risk of developing equine recurrent uveitis.

Squinting, redness, and puffiness are all symptoms of a uveal tract infection.

If left untreated, it may cause permanent damage to the retina.

In addition, a significant percentage of Appaloosas are carriers of the gene that may lead to congenital stationary night blindness.

Horses affected by the condition are born without the ability to see in the dark.

A veterinary ophthalmologist may conduct a visual test to evaluate if a horse has the problem.

Some Appaloosas, particularly those with exposed pink skin and light hair, are more vulnerable to sunburn.

There is also a possibility of complete blindness.

When compared to other breeds, Appaloosas are up to eight times more likely to become completely blind.