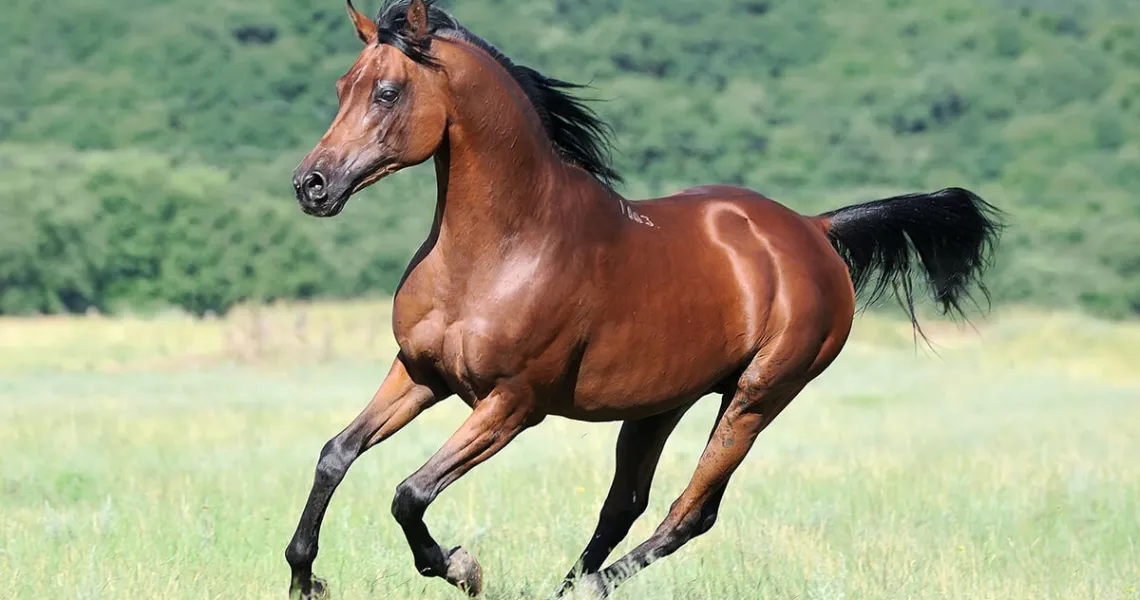 If you’re looking for a beautiful and regal horse, the Arabian is the breed for you.

They are known for their beauty, athleticism, and grace, and this horse is sure to turn heads wherever you go.

In this blog post, we will discuss everything you need to know about the Arabian horse breed.

So if you’re interested in learning more about these magnificent animals, keep reading!

Here are some of the key things you need to know about the Arabian horse:

There are claims that the ancestral Arabian was a wild horse in northern Syria, southern Turkey, and maybe the piedmont regions to the east.

The land along the northern edge of the Fertile Crescent, which included a portion of Iraq and extended south along the Euphrates River, west across Sinai, and along the coast of Egypt, was characterized by a temperate climate and received an adequate amount of precipitation, making it an ideal environment for horses to thrive in.

It has been hypothesized by historians that Arabian horses originated in the southwest region of Arabia, pointing to archaeological evidence indicating that the three major rivers in this region provided natural wild pastures and were the main centers in which undomesticated Arabian horses first appeared.

Due to the fact that the interior of the Arabian Peninsula has been dry for approximately 10,000 years, it would have been extremely difficult, if not impossible, for horses to survive in that dry land without the assistance of man.

In about 3,500 B.C., the Bedouins (nomads from the Middle Eastern desert regions) domesticated the camel, which gave them the means of transportation and food they needed to survive in central Arabia, where they first set foot about 2,500 B.C.

At that time, they took with them the ancestor of the modern Arabian horse.

It is not completely clear where the term “Arab” came from.

It can be associated with nomadism, connecting it with the Hebrew word “Arabha,” which can be translated as “dark land” or “steppe land.”

In any case, the word “Arab” has no reference to nationality. In the Koran “a’rab” is used for Bedouins (nomadic desert dwellers).

The Arabs themselves seem to have coined the term long ago to differentiate Bedouins from Arabic-speaking city inhabitants.

The majority of today’s breeds of light horses may trace their ancestry back to the Arabian horse, which is responsible for imparting many desirable characteristics.

An ancient Bedouin legend says that the Arabian horse was born of a handful of the south wind, and virtue is bound into the hair of its forelock, its master is its friend and he has been given the power of flight without wings.

Bedouins have raised Arabian horses for thousands of years in the deserts of the Arabian Peninsula, using them for lengthy journeys and rapid raids on enemy camps.

Because of it the Arabian horse developed a big lung capacity and tremendous endurance to adapt to the harsh circumstances of the desert where they originated.

As far back as 3000 BC, the Bedouin tribes of the Middle East have kept precise records of their horses’ pedigree.

Because of the harsh environment, the nomads had no choice but to share their food, water, and even their tents with their horses.

As a result, Arabians developed a close affinity to people and a high level of intelligence.

Over the course of many centuries, the Bedouin tribes have steadfastly worked to maintain the genetic integrity of their horses.

Because of the limited resources at their disposal, the breeding procedures were quite selective.

These practices, which finally contributed to the Arabian being a treasured property around the globe, are ultimately responsible for the gorgeous and athletic breed that we are familiar with today.

There is archaeological evidence of horses in the Middle East going back 4,500 years that resemble current Arabians.

This makes the Arabian horse breed one of the oldest breeds in existence. Arabian bloodlines may now be found in virtually every modern riding horse breed.

For the Bedouin, the horse of the desert had become an essential part of their way of life, treasured as a gift from Allah and adored nearly to the point of worship.

Breeding and purity traditions were created in order to maintain the breed “Asil,” or pure.

Any admixture of blood of horses from the mountains or the towns around the desert was strictly forbidden.

While other desert-type breeds emerged in North Africa and the Great Desert’s periphery, they were not of the same blood as Arabians and were despised by the proud Bedouin.

Through the ages, the nomadic tribes of what is now Syria’s northern desert developed a reputation as the world’s most proficient horse breeders.

In the Bedouin culture no greater gift could be given than an Arabian mare.

The importance put on the mare led to the inevitability of tracing the Arabian horse’s family tree through his dam.

The only prerequisite for the sire was that he is “Asil”, or pure.

So much the better if his dam was a “celebrated” mare from a distinguished mare line.

Mare families, or lines, were given names based on the tribe or sheik who bred them.

The five basic families of the breed, known as “Al Khamsa”, include lines called Kehilan, Seglawi, Abeyan, Hamdani and Hadban.

Breeding for purity resulted in distinct traits for each line that could be recognized and identified.

The Kehilan strain was noted for its deep chest, and masculine power and size.

The Seglawi was known for refinement and almost feminine elegance.

The Abeyan line was very similar to the Seglawi, and tended to be refined, and would also often have a longer back than a typical Arabian.

The Hamdani horses were considered plain, with an athletic, and somewhat masculine, large boned build.

The Hadban line was a smaller version of the Hamdani, and they shared several traits including big bone and muscular build.

In the 1700s, they arrived in the United States.

Arabian Horse Registry of America was established in 1908.

Arabians have a short, straight back, a deep chest, well-sprung ribs and strong legs, and a more horizontal pelvic bone position.

Some Arabians, though not all, have 5 lumbar vertebrae instead of the usual 6, and 17 pairs of ribs rather than 18.

Head is comparatively small with the profile being straight or preferably slightly concave below the eyes.

Eyes are large, round, expressive, and dark set well apart (glass eyes shall be penalized in Breeding classes).

Ears are small and they are smaller in stallions than mares.

Neck is long and arched, set on high and running well back into moderately high withers.

They have a naturally high tail carriage.

Many Arabians also have a slight forehead bulge between their eyes that is called “the jibbah” by the Bedouin.

This adds additional sinus capacity, which is believed to have helped the Arabian horse in its native dry desert climate.

The Arabian horse, despite its smaller stature, has a higher density of bone than other breeds, short cannons, sound feet, and a broad, short back, all of which contribute to the breed’s physical strength.

In this way it is possible for even the smallest Arabian to carry a heavier rider. Its entire appearance exudes energy and nobility.

Arabians may also have white face markings, as well as stockings or socks on their legs.

The white socks and white faces of certain bloodlines are well-known characteristics.

No matter what color their coats are, Arabians always have black skin, with the exception of areas where they have white markings.

The dark color of their skin offered protection from the scorching desert sun.

Because purebred Arabians do not carry dilution genes, they cannot be dun, cremello, palomino, or buckskin in color.

English to Western disciplines, and it is positioned as the undisputed champion of endurance events

There are six known genetic disorders in Arabian horses.

1.Severe Combined Immunodeficiency (SCID) – a condition in which a foal is born without an immune system and dies as a result of an opportunistic infection before reaching the age of three months.

DNA testing can identify healthy horses who are carriers of the gene, thus careful and planned breeding can prevent the likelihood of an affected foal being born.

3. Cerebellar abiotrophy (CA or CCA) – foals with this disease are usually born with no obvious symptoms, but after six weeks of age, they begin to show signs of severe incoordination, tremors in the head, and a wide-legged stance, all of which are caused by the death of the Purkinje cells in the brain.

It varies in severity, with some foals displaying signs of severe coordination issues quickly, while others show signs of less severe issues.

Mildly affected horses may have a normal lifetime, but the most majority are euthanized before reaching maturity because they are so accident-prone as to be dangerous.

Carriers and affected animals may now be identified genetically, thanks to a test developed in 2008.

4. Occipital Atlanto-Axial Malformation (OAAM) – this is a condition in which the occiput, atlas, and axis vertebrae in the neck and at the base of the skull are fused together or deformed in some other way.

The symptoms may vary from a little loss of coordination to complete paralysis of both the front and back legs.

Between seizures, foals look fine, and seizures usually stop between the ages of 12 and 18 months.

6. Guttural Pouch Tympany (GPT) – occurs in horses ranging from birth to 1 year of age and is more common in fillies than in colts.

Foals are born with a condition that allows the pharyngeal aperture of the eustachian tube to operate as a one-way valve, allowing air to enter but not exit.

In order to correct the abnormality in the entrance of the guttural pouch, surgical intervention is required.

If the foals are effectively treated, they could grow up to have normal lives.

In the grass oasis along the Euphrates and Tigris Rivers in the countries that are now known as Syria, Iraq and Iran, and in other parts of the Arabian Peninsula.