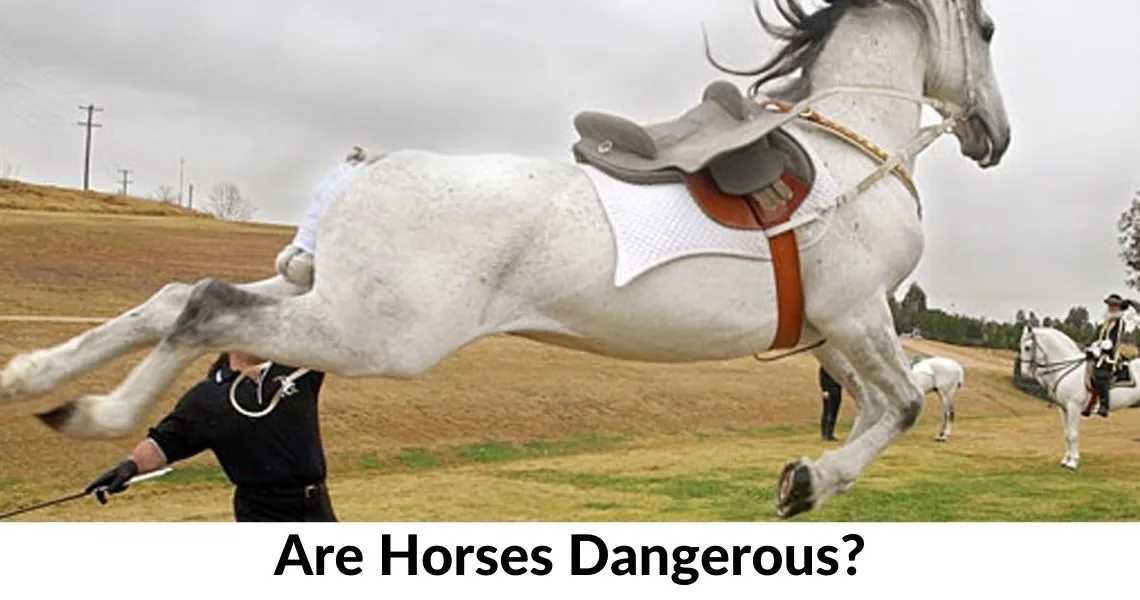 Horses can be dangerous, especially when found in the wild.

We can’t deny the fact that an animal that can weigh up to 1200 kg (about 2600 lbs) and can reach the speed up to 55 mph (about 80 km/h) can be dangerous. Horses, just like any other animal, have natural instincts to protect themselves if they find themselves in a hostile environment.

Horses practice the “fight or flight” principles. It means that whenever the horse feels threatened, by default he will start running away. If the horses can’t run away, they will resort to biting, kicking, striking or rearing to protect themselves.

The level of danger depends on whether the horse is training or not, and of course the amount of training they have done. Wild horses are more dangerous because their natural environment doesn’t include people who often try to approach and feed them. So you have to be careful with every step and every move you do, especially with the wild ones, because you never know how the horse will react even if the horse is well trained.

Can horses attack you?

It has been recorded that horses can attack people if they find themselves in a hostile environment.

Horses, talking about domesticated animals, are really respected, and can be a good companion. The reason why a horse would attack a human, another horse, or another species as well, can be caused by pathological dominance aggression or just because they are agitated.

You shouldn’t have to worry about a horse randomly attacking you though. As I said pathological dominance aggression can cause the horse to lash out in order to establish themselves as the dominant animal in the area, which ends with an attack. Also the majority of attacks are directly or indirectly caused by humans, as a result of exacerbating factors that make a horse anxious, defensive or put them in pain.

In most cases the reason for horses attacking their owners or lashing out at them is because the horse was pushed to its physical or emotional limits. Many reasons can lead to an attack, such as:

Yes, horses can be very aggressive, but for the majority of the time they behave well.

The most common cause for a horse to attack is:

What to do if a horse chases you?

If you find yourself being chased by a horse, you should stop and never run away from them.

Horses are prey animals, but when they attack they try to be dominant. So don’t let your horse beat you, you have to beat the horse, to show and prove that the dominance is in your hand. You should turn on the predator side of you, to make the horse afraid of you, not the opposite.

It’s not easy, but if you want to survive you have to do it. Some people are saying that you should wave your hands around, to make yourself as big as possible, then the horse will turn around and leave you alone.

Fun fact 3: We asked Beck if she had a favourite horse she says; ‘My favourite horse is Misu Bond, the most dangerous horse I’ve ever known but the one I love the most!’

How many people die from horses?

Every year, at least 20 people die from horses, mostly in horse riding accidents.

In reality it is more than 20. A lot of people die every year because of horses, due to accidents or other reasons. A research study proved that 90 percent of injuries and death cases on farms were caused by horses and cows. Another research study indicates that every year at least 72 people die as a result of other mammals which includes horses as well. There is a huge list of racers who died in horse competitions and races. The number of dead racers who died in the race in 2019 was 493.

The horse is dangerous at both ends and uncomfortable in the middle. #HorseRiding #weekendmood pic.twitter.com/KpeK8VIEIx

What is the most dangerous horse?

The most dangerous horse is the Przewalski’s horse.

Wild mongolian breed, the Przewalski’s horses are believed to be the most dangerous breed of wild horses. They are unpredictable and highly dangerous. Mongolian takhi horses are hard to be found in nature, because their number has decreased over the years.

Today, they mostly live in zoos and reserves, because this breed is endangered, but not extinct yet. Talking about dangerous horses in general, no matter what breed the horse is, every horse is potentially dangerous. The most dangerous horse is the horse that bites, kicks, that is always aggressive, and the horses that want to show their dominance over their owners.

Can you die if a horse falls on you?

Yes, you can die if a horse falls on you because horses can be extremely heavy and pressure you would feel can lead to death.

People that ride horses have had experiences with their horse falling on them. They said that they needed to pull themselves out from under the horse because the horse couldn’t get up. The best case scenario is not having the horse stay on top of you and keep pressuring your body until the point where your organs start exploding.

The thing is, what if you injured yourself so bad because of the fall, and the horse was stuck on top of you, and didn’t move for a long time? If nobody was able to help you quickly you would probably die. That’s why we can’t be sure that you can survive every time your horse falls on you.

It’s a natural behaviour for horses to bite. The bite can be a sign of aggression, but as I said they usually bite each other as a communication tool. It’s worth noting that our skin isn’t as hard as horse’s skin so it can be harmful for people to be bitten.

Why would a horse bite you?

Horses usually bite each other due to communication, as a sign of aggression, affection and bad behaviour. This is why they would bite humans too.

Some horses bite humans because they are playful and want our attention. Additionally, your horse may bite you because they feel uncomfortable with the saddle or the girth being so tight.

Horses also bite due to illness or infection. Many types of illness and infection can lead to situations where your horse changes its behaviour and starts biting you. You might want to consider contacting a veterinarian to examine your horse.

Can a horse bite off your finger?

Yes, a horse can bite your finger.

Our flesh and bones aren’t designed to handle a horse’s bite. Despite the fact that horse’s teeth and jaws aren’t designed to bite someone’s finger off, they can do it. Horses are curious and are willing to explore everything, so it’s not a big deal for a horse to put some more pressure to chop somebody’s finger off. It depends on the owner too. If your horse has a habit of nibbling on your fingers, it is your responsibility to break that habit and replace it with something else such as nibbling on a carrot.

What to do if a horse tries to bite you?

If a horse gets into a habit of biting you, you need to become more firm and train him not to do so.

Reprogramming a horse’s bad habits is a process that requires time. That’s also a common question asked by new horse owners. Biting comes natural to horse and to him it’s a communication tool.

If the biting comes due to aggressive behaviour, then it’s a clear sign that the horse is not completely trained. That behaviour needs to be changed by putting more hours into rewiring his brain and removing these bad habits.

Aggressive horses are questioning your role as a leader, so the key to success is communication and good training. You have to provide consistent training, and work on teaching your horse to be respectful. At the end if you can’t handle your horse you should seek professional help, since biting is a serious problem, especially when it’s out of

In this article we discussed if and how dangerous horses can be. In general, horses are warm and welcoming animals that enjoy spending time with their owners. The reasons for their aggressive behaviour could come due to them feeling discomfort through fear, physical limitations or simply when they feel neglected.

Biting is a habit that can be positive and negative. Horses use biting to establish communication with other horses. A lot of the time, biting will be uncomfortable to horse owners. In that case, the horse owner should consider going back to training to change those habits.