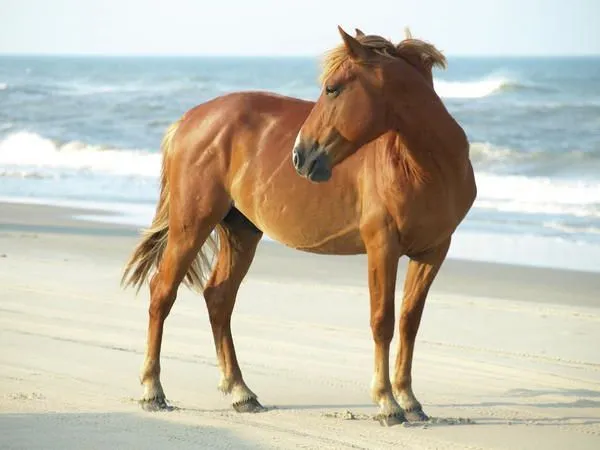 The Banker is a rare breed of horse that comes from North Carolina in the United States.

It is a feral horse that inhabits the Outer Banks islands.

If you’re interested in learning more about this unique breed, keep reading!

Here are some of the key things you need to know about the Banker horse:

Banker horses are native to the barrier islands off the coast of North Carolina known as the Outer Banks.

They may be found in the Rachel Carson Estuarine Sanctuary, as well as on Corolla Island, Ocracoke Island, Currituck Banks, and Shackleford Banks.

Banker horses are descended from domesticated Spanish Mustang horses that were likely brought to America in the 16th or 17th century by explorers and abandoned on the Outer Banks of North Carolina, which is where their name, “Banker,” was derived from.

Some historians believe that famous explorers brought Spanish Horses to the islands with the intention of breeding them for settler colonial communities.

On the other hand, there are many who believe in more interesting origin tales.

There is a widespread belief that these now feral horses arrived on the islands by swimming from shipwrecked boats.

Another theory is that they were abandoned on the islands when ships wanted to lighten their load and shed extra weight.

Those horses were originally domesticated, but  because they were forced to fend for themselves after being abandoned, they’ve become feral.

The horses get the majority of the fresh water they need from the Saltmarsh Cordgrass, which they eat together with bulrush, sea oats, and poison ivy.

Due to the high concentration of salt in the water around the Outer Banks of North Carolina, horses are unable to consume huge quantities of it.

The horses that live on the Outer Banks are much smaller than farm-raised Bankers, and it is probable that the breed’s small stature is a result of its restricted diet.

The government started taking responsibility for their well-being in the late 1980s when the overpopulation of horses on the islands led to several of the horses dying of malnourishment.

The Banker horses are now under the watchful eye of the National Park Service, the State of North Carolina, and a number of private organizations to prevent overpopulation, overgrazing, inbreeding, and disease transmission.

Their population size is managed by the implementation of birth control and adoption policies.

The Outer Banks of North Carolina are now home to roughly 400 Banker horses.

The Banker Horse is an important part of North Carolina’s history, which is why the breed was designated as the state horse.

Docile temperament, calm and even disposition

The Banker horse is a sturdy small horse with a compact build.

It has a wide forehead, a straight or slightly convex profile, a long mane, a deep narrow chest, a short back, a sloped croup, and a low-set tail.

Barker horses are known for their fluid gaits and big strides.

They have just five lumbar vertebrae, rather than the six seen in most other breeds.

Any color, but mostly brown, bay, dun or chestnut

They have also been used by several mounted patrols and ridden in parades, and are a tourist attraction on the island.

They can survive on very little food