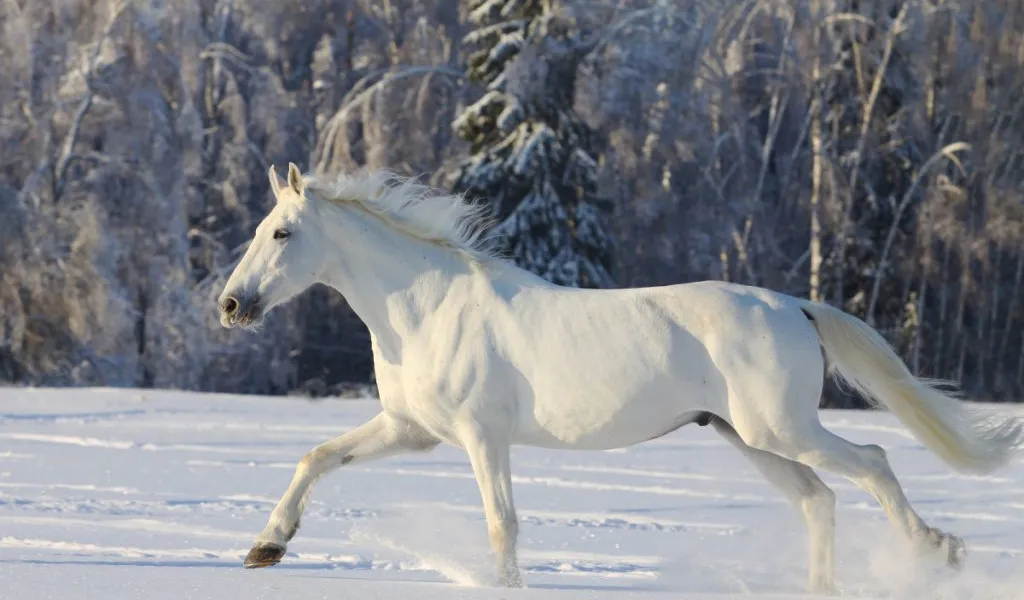 Did you know there is a horse breed that is native to the state of California?

The Camarillo White Horse is known for its gentle nature and friendly temperament.

If you are interested in learning more about this very rare breed, read on!

Here are some of the key things you need to know about the Camarillo White Horse:

They have a particular gene mutation that prevents the coat from expressing color, and this is why they are albino.

As opposed to gray horses, which are born dark and gradually lighten with age, white horses remain white throughout their lives.

The Camarillo White Horse is a relatively new breed, dating from the early 20th century.

It all started in 1921 when a breeder Adolfo Camarillo bought a 10-year old Spanish Mustang stud named Sultan for $500 from the California State Fair in Sacramento.

Soon after Adolfo’s passing, his daughter Carmen, continued with the breeding program and showed them in parades on a regular basis.

As stated in her will, all of Carmen’s horses were auctioned off after her death in 1987.

Unfortunately, as a result of the auction, the new breed was dangerously close to becoming extinct, and by the year 1991, there were less than a dozen of them left.

The Camarillo White Horse Association was formed in 1992 in response to this dire situation in an effort to preserve the breed.

The Camarillo Whites are now being cared for by private breeders situated in Ventura County, California.

Their breeders put in a lot of time and effort to ensure the breed is preserved, and they frequently participate in horse shows and parades.

The official registry of the breed has created a stud book to reduce the likelihood of inbreeding.

It is required that at least one of the Camarillo’s parents come from the original stock of the breed – however, the other parent can come from other breeds, such as the Standardbred or the Andalusian, for example.

The registry also keeps a separate record of the non-white foals of the above mentioned bloodlines.

Since the 1930s onward, the Camarillo White Horses have become well-known all along the coast of California for their performances at a variety of events.

They became famous for their regular participation in the Tournament of Roses Parade, and they were even in the San Francisco-Oakland Bay Bridge opening parade.

They are the official horse of the city of Camarillo. Since its beginning in 1924, they have participated in every Santa Barbara Fiesta parade.

They have muscular, compact but refined build, and an expressive face with a clean-cut head with big eyes.

The neck is arched, and withers are well-defined.

The legs are strong.