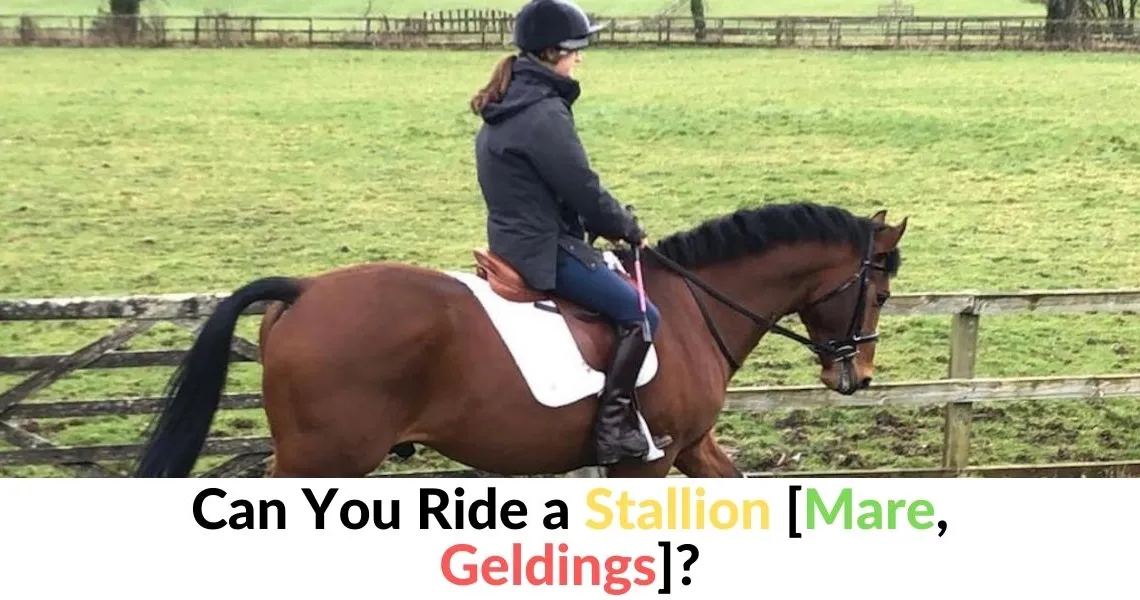 Can you ride a stallion?

Given that a stallion horse of any breed is expected to have somewhat of a temper, it is often asked if stallions can be ridden? At the same time, any stallion is still a horse with its unique characteristics and this also factors in the decision to ride it or not.

So what’s the most simple answer to the question: can you ride a stallion? Yes, you can ride a stallion. That being said, riding a stallion is not as easy as one might think.

Stallions are known for their temper; they are impulsive, and very aware of any potential company. Thus, in general stallions can be ridden pretty much just as any other horse, but whether one decides to do it or not should be based on several other factors. Even if your stallion is a very calm and gentle horse, be aware that his temper might surprise you when you least anticipate.

Who rides a stallion?

Who rides a stallion is a frequent question.

Due to their temper, stallions are more demanding and more prone to cause injuries; thus, stallion is not a correct option for a less experienced rider.

Given their unpredictable behavior, stallions should be ridden by riders who understand how to act and which situations to try to avoid in order to have a good ride.

Also, a less experienced rider won’t be able to follow all of the steps and behavior changes of a stallion, which can be crucial for the safety of both the rider and the stallion.

Stallions can be ridden as any other horse, but the experience of riding a stallion tends to be somewhat different. Experience itself also depends on the expectations of the rider not only on the temper of the stallion.

Riding a stallion is similar to riding a gelding, but stallions tend to be less sharp and generally harder to manage during the ride.

It is not always as easy to direct a stallion as it is with gelding. However, not all stallions are alike of course. There are stallions that are by their own nature less aggressive, even calm, and such stallions give a nice experience to the rider.

Some riders simply like the fact that they are riding a stallion, and enjoy the experience in this regard. However, always be aware that riding a stallion simply because of his looks is definitely not a good idea since he also acts like a stallion. In general, stallions are very unpredictable and riding stallions is just as well.

How long after a horse is gelded can you ride?

The answer to the question how long after a horse is gelded can you ride depends on the age of the horse as well as on the pace of his recovery. Age factor is connected to their general ability to be ridden at a certain age.

Most horses are gelded very young, about six months old, which means they won’t be able to be ridden for a couple of years.

However, if this is an older horse that was already ridden and later gelded then one should only wait for his recovery. For horses that were already ridden, it is expected that after a couple of weeks their recovery will be complete (unless there are some unpredictable complications).

Most of the horses do recover rather fast. Also, a walk or even a ride (if in a normal recovery process) can help reduce swelling and help them recover faster. For the first few minutes they might be stiff and slow, but this normally lessens as they continue with activity. In any case it is highly recommended to observe the behavior of the geld and act based on the circumstances.

Are stallions better than geldings?

Stallions and geldings differ, but it is hard to say that one is better than the other.

To answer the question if stallions are better than geldings you have to be clear on why do you want this horse.

Compared to geldings stallions are usually much more tempered, but this is normal and caused by hormones.

Geldings, on the other hand, are more laid back as they due to castration do not have “hormonal issues” any more.

Having said all of this, it is worth noting that stallions and geldings need to be properly trained and handled in order to act properly. But, still, it is much more often that stallions act wild and geldings act calmly. Stallions are easily alarmed if there is a mare anywhere near to them, which is also caused by hormones.

Stallions tend to be more aggressive and unpredictable, but can be trained to act with good manners. Still, stallions make good riding horses for experienced riders, but for those less experienced it is always recommended to ride geldings.

Always be careful with stallions as they are very self-interested and even the well-behaved ones can surprise you when you least expect.

In comparison to stallions, mares are definitely a better choice for the beginners when it comes to riding.

However, this also has some expectations like during the heat cycles. Take into consideration that mares are female horses and hormones play a role in their behavior. A vast majority of mares will, if properly trained, be very good horses to ride. Because of hormones, they might be moody, but unless there are deeper health issues they will act properly. Thus, mares are good riding horses with a few expectations.

Can you ride a mare?

Mares are simply female horses and they can be ridden just as any other horse.

Nevertheless, if the rider is a complete beginner in riding then mares might surprise due to hormones. This is not as significant of an issue as it is with stallions since mares are only moody during the breeding season unless there are stallions around. Therefore, the majority of the time mares can be ridden.

Can a broodmare be ridden?

Broodmares are valuable as horses mostly through their role of breeding, but they can play different roles as well.

Yes, a broodmare can be ridden, but the rider has to be careful in terms of how long and tough her physical activity can be.

There are broodmares that are only kept for breeding and were never backed; this kind of broodmare cannot be easily ridden as she needs training first. Assuming that the mare was healthy, to begin with, she will be a healthy broodmare. For the first several months of her pregnancy, a broodmare will be fine with work and rides. Nevertheless, priority should always be given to the health of both the mare and the foal and should not be compromised with any unnecessary difficulties.

Can you ride a pregnant horse?

Yes, a pregnant horse can be ridden.

As a matter of fact, in the early days of pregnancy the mare can be at her best for rides, due to the fact that she no longer has an estrus cycle. Therefore, in the first few months of the pregnancy rides tend to be more enjoyable as the mare is in much less danger of mood swings caused by hormones.

Also, a pregnant mare is less sensitive to the presence of other horses so it might be easier to interact with her and keep her focus on the ride. As a general rule, for the first six months of their pregnancy mares can be treated almost like any other horse. As their pregnancy progresses from the sixth month onwards the mares will start becoming larger and more uncomfortable and less willing to be ridden.

For the last six weeks of her pregnancy, mare should be “off” any significant activity. For these last weeks especially, keep her in a larger pasture so she can have light walks as this will help her reduce fluid retention and aid circulation.

How long should you wait to ride a horse after it gives birth?

There is not a strict time frame on how long you should wait to ride a horse after it gives birth.

However, there are some guidelines that you should be very mindful of. First, be aware of the state in which the mare is after foaling because any complications can cause her need for longer recuperation.

If there were no complications, six to eight weeks after foaling a veterinarian should examine the mare and check if she can continue with normal adjustment.

Second, be aware of the character of the mare and the foal. Some mares and foals are very clingy and attached, some less, some are not clingy at all. Generally, mares are very good moms, so in order to keep them happy be aware of their relationship with their foals. If the mare is deemed fit by a veterinarian you can gradually start riding with a foal in her sight to keep them both at ease. After a few weeks of the parallel care and ride you can start gradually taking mare for longer rides without the foal at her sight.

Can you ride mares in season?

Similar to humans, not all mares act the same under the influence of hormones.

Yes, you can ride a mare in season.

However, this usually depends on the character and training of each mare.

Some mares are generally well-behaved and it is very hard to notice they are in heat. Other mares tend to be difficult and temperamental but will behave after correction. The smallest number of mares will act so out of character that it will be impossible to calm them down.

As for the many other issues when it comes to the behavior of horses, the handler has to observe his/her horses carefully and act accordingly. Since mares are moody in season, rides can be unpredictable, especially if there are other horses in the vicinity, so the rider has to be completely aware of all of the circumstances and act quickly if needed.

When can I ride my mare after foaling?

Mares that had a normal birth and regular recovery process can be ridden six to eight weeks after foaling.

However, this is only a broad guideline and you should be aware of the state in which your mare is after giving birth. Each mare has her process of adaptation and recovery so pay close attention to her behavior and consult a veterinarian if anything seems out of ordinary.

Veterinarian does a regular check up after several weeks, which is good for you to know if your mare can continue with normal activities gradually. In the beginning it is best that foal accompanies her mom all the time when they are out of pasture. This will make it much easier for the rider to have cooperative mare that will gradually get used to rides without her foal by her side.