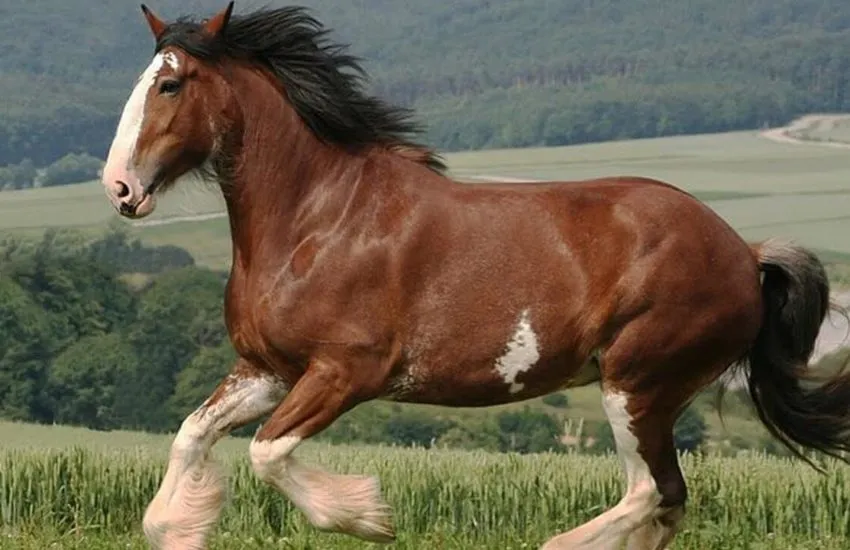 The Clydesdale is a large horse that originated in Scotland and is known for its strength, vigor, and good temperament.

Clydesdales are used for pulling carriages and wagons, as well as agricultural work.

If you’re interested in owning a Clydesdale, or just want to learn more about them, read on!

Here are some of the key things you need to know about the Clydesdale horse:

The Clydesdale hails from Lanarkshire in Scotland, and the name of the breed comes from the nearby River Clyde.

Their history may be traced back to the middle of the 1700s, when local stock was bred with bigger Flemish horses and then chosen for use in agriculture as well as for all other forms of heavy carrying, including transportation through the streets of Glasgow.

The Clydesdale breed was bred to be able to work hard and for extended periods of time.

They have been used to pull agricultural equipment, logs in forestry, freight and milk carts, and have done other typical hauling chores as well.

In 1826, Clydesdale horses were first exhibited under the breed name, and the practice of renting out purebred stallions helped further standardize the breed.

In 1877, the Clydesdale Horse Society was established, although the breed registry’s records can be traced all the way back to the 1830s.

They were often mixed with Dales Ponies at the beginning of the 20th century, which resulted in the creation of mid-sized draft horses that were excellent for hauling commercial carts and military artillery.

Clydesdales were very close to being extinct as a direct result of the gradual transition away from the use of heavy horses and toward the use of automation in industry and agriculture.

World War I also contributed to the breed’s decline in numbers.

It is the goal of modern-day Clydesdale breeders and supporters to assure the breed’s continued existence.

In the United States, where there is already a substantial population of Clydesdales, an extra 600 horses are registered annually.

After the United States, the breed’s population is most prevalent in the following countries: the United Kingdom, Canada, and Australia.

The hardy Australian Draft Horse is descended in part from the Clydesdale.

Calm disposition, very easy to train, gentle, a joy to work with

The breed has a characteristic movement, which consists of lifting each foot neatly off the ground and allowing the sole of the foot to be seen when seen from behind.

The forelegs are firmly established under the shoulders, the legs are straight, and the feet are tough.

Clydesdales have a flat profile with a breadth between the eyes, and a wide muzzle.

The withers are high, the back is short, and the hindquarters are well-muscled and long.

The Clydesdale should combine style and strength.

The most common color is bay, though black, but also brown, chestnut, and roan

Clydesdales were historically utilized for agriculture, transporting coal in Lanarkshire, and heavy hauling in Glasgow.

In modern times, it is still put to use for draft purposes, such as in agriculture, logging, and driving.

They are shown in harness and lead line and classes at county and state fairs, and national exhibitions. Some Clydesdales are also shown under the saddle.

Due to their large stature and distinctive white feathered feet, Clydesdales are often used in carriage services and as parade horses.

The teams of Budweiser Clydesdales are among the most well-known representatives of the breed.

Clydesdales have been identified to be at risk for several diseases:

“Clyde’s itch” – a colloquial term for a skin condition on the lower leg where feathering is heavy, and it is thought to be caused by a type of mange.

Clydesdales are also prone to developing sunburn on any pink (unpigmented) skin on their faces.

Feathering on their legs, and high-stepping gait