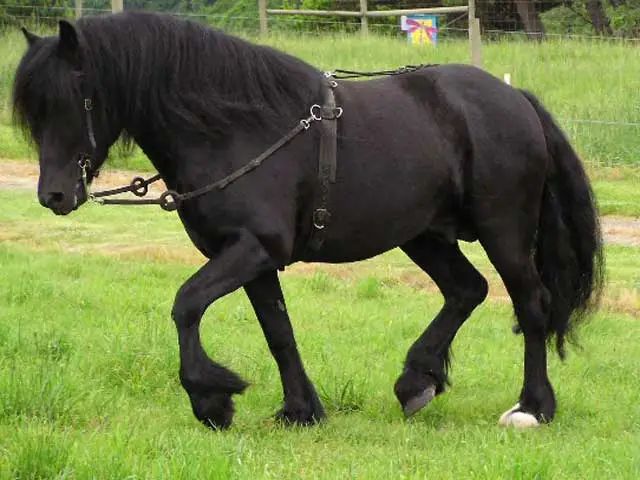 The Dales Pony is a hardy, versatile pony found throughout the United Kingdom.

Prized for its strength and good temperament, the Dales Pony is well-suited for a variety of purposes, from riding to driving to agricultural work.

Hardy and sure-footed, this pony is perfect for anyone looking for an all-around horse.

Here’s everything you need to know about the Dales Pony!

Here are some of the key things you need to know about the Dales Pony:

The Dales Pony, along with the Dartmoor, Exmoor, Fell, and the New Forest Pony, is one of five native English pony breeds.

It is believed that these breeds are descended from ancient Celtic horses that migrated to the British Isles from northern Europe.

The exact origin of the Dales is somewhat unknown.

It is speculated that the now-extinct Scottish Galloway pony and Friesian horses introduced by the Romans from the Netherlands in the 2nd century are among its ancestors.

The history of lead mining in the Dales region of England, from the Derbyshire peaks to the Scottish borders, is closely related to the history of the modern Dales pony.

The Dales were first used as pack animals for the lead mining industry on the eastern slopes of the Pennines in the northern English uplands.

Their close relative, the Fell Pony, was used on the western slopes. Until the early 1800s, these tough ponies were used to transport loads of lead ore from the mines to the coast.

On the way back they carried coal, covering 200 miles each week through rough, rocky terrain.

As the railroad became the primary mode of transportation for the mining sector, the pony continued to find use on mountainous farms as a small draft, and riding animal.

It was around this time that the Dales Pony was crossed with the Clydesdale horse in an effort to increase the pony’s size.

As the use of carriages grew more popular, the Norfolk Trotter and the Yorkshire blood were bred into ponies in order to give them a flashier knee and hock movement.

In 1916, the Dales Pony Improvement Society and studbook were established, ultimately ensuring the breed’s survival.

The Dales Pony was used extensively by the British military to transport weapons and equipment in both World Wars.

Just as was the case with many other breeds, their population was severely depleted during that time.

The majority of the surviving ponies were left behind on the European mainland, and many of those animals were slaughtered after World War II to feed starving Europeans.

Also, following WWII mechanization soon replaced most draft animals, so by 1955 only four fillies were registered with the breed association.

Luckily, those who were passionate about the breed realized that the situation was dire and began with the conservation efforts.

In the 1960s, three Fell Pony stallions were used in an effort to resurrect the breed.

By 1971, the breed had made significant progress toward recovery, and in 1991 twelve ponies were brought into Canada.

By the year 1994, four fillies and one colt had been brought into the United States.

The Canadian Mountain and Moorland Society, which serves as the breed organization for Dales ponies in North America, estimated that there were 800 such ponies in the world in 1999, with around 60 listed in the North American studbook.

Dales pony is a strong, hardy breed with good stamina.

The head is neat with a relatively small muzzle, and the profile is straight.

The neck is long, muscular and set nicely into the sloping shoulders.

The withers are not too pronounced.

The back is short. The mane and tale are silky and abundant.

The chest is broad and both the front and hind quarters are powerful.

The hooves are hard and well-shaped, and the feet are feathered.

They are good movers, with straight action.

They are very sure-footed and can easily carry adults.

Usually black, but some brown, bay gray and roan are seen.

White markings are permitted as a star and/or a snip, and white to the rear fetlocks.

They can be affected by a fatal genetic disease called Foal immunodeficiency syndrome (FIS) – The affected foals have an impaired immune system and so are unable to effectively fight sickness; as a result, they die within the first month or two of life.

Since 2012, all colts have been required to pass a health test before they can be licensed.

Since mares can be carriers as well, they too need to be tested.