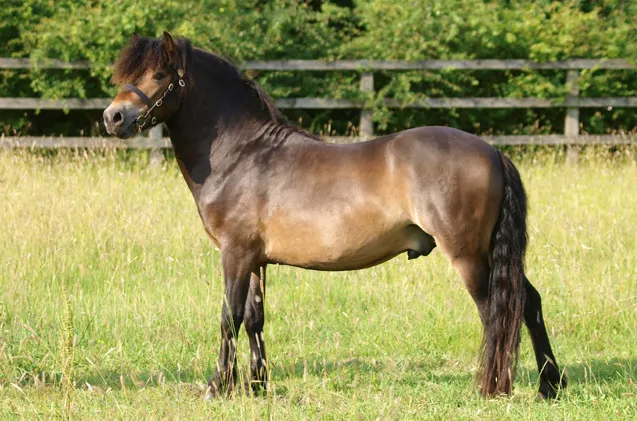 If you’re ever lucky enough to visit the Exmoor National Park in England, you’ll likely see some of the majestic Exmoor Ponies that call that area home.

These hardy creatures have roamed these moors for centuries, and their wild spirit is still very much alive today.

So what exactly do you need to know about these impressive animals?

Keep reading to find out!

Here are some of the key things you need to know about the Exmoor Pony:

The Exmoor Pony is indigenous to the hills of Exmoor, an expansive moorland in southern England that is bisected by the River Exe.

These iconic ponies have been right at home in Exmoor for thousands of years, perfectly adapted to the environment.

They are the oldest native pony breed in Britain, and one of the oldest known breeds in the world in general.

While their ancestors were really wild, now all Exmoor ponies are privately owned and managed.

They are, nevertheless, generally self-sufficient.

The first documented mention of ponies on Exmoor dates all the way back to the Domesday Book in 1086.

The majority of Exmoor was sold in 1818, after centuries as a “Royal Forest” (‘forest’ meaning a hunting field).

Thirty horses that were determined to be the original old type were saved and moved to a nearby moorland.

The current Exmoor population may trace its genetic lineage back to these ponies.

The Exmoor Pony Society is a charitable organization that was established in 1921 by moorland farmers for the purpose of registering pure-bred Exmoor ponies, conserving the breed, and preserving the breed standard with the intention of protecting this significant element of Exmoor’s history.

During World War II, Exmoor was used as a training ground for the military, and only around 50 ponies are known to have survived the war due to the fact that many of them were killed for meat and also used as target practice by the troops.

After the war, a small number of breeders began making attempts to conserve them in order to prevent their extinction.

Today, there are approximately 500 ponies running in about twenty herds in the Exmoor’s commons; two of the herds are owned by the National Park Service, and the rest are owned by private people.

All of the Exmoor ponies that live on the moor are owned by moorland farmers who have special grazing permissions.

Farmers and local Society members keep track of the herds at various phases of the breeding cycle, noting which mares are in foal and when the foals are born.

Born in the spring and early summer, foals spend the summer running with their moms and accumulating fat reserves to get them through the harsh winter.

The herds are brought to the farms in the fall for inspection and to be microchipped for identification purposes.

After being weaned, foals are either put up for sale or sent back to the moor to spend the winter there.

As demand for Exmoor ponies grew, small herds were developed in other regions of England and some were even shipped to the United States and Canada.

Exmoor Ponies antiquity and genetic divergence from other breeds has been established, and they are regarded as the most primitive of the northern European horse breeds.

Exmoors closely resemble the primitive wild horse in morphology and appearance (phenotypically), and present DNA research is trying to identify just how much of the old genome, if any, exists in the Exmoor Pony.

The Exmoor Pony is currently listed as endangered.

The head is wide with thick mane.

They have developed a “toad eye”, an extra flesh on their brows to protect them from wind and rain.

The mane is thick.

Their summer coat is fine and glossy, but in the winter they grow a coarse, two-layered protective coat designed so the rain would run down it rather than soak the skin.

Exmoor Ponies are robust and tough, designed for life on the unforgiving moorland.

From dun to bay or brown.

They have characteristic mealy markings on the flanks, muzzle and around the eyes.

The oldest native pony breed in Britain, and one of the oldest known breeds in general