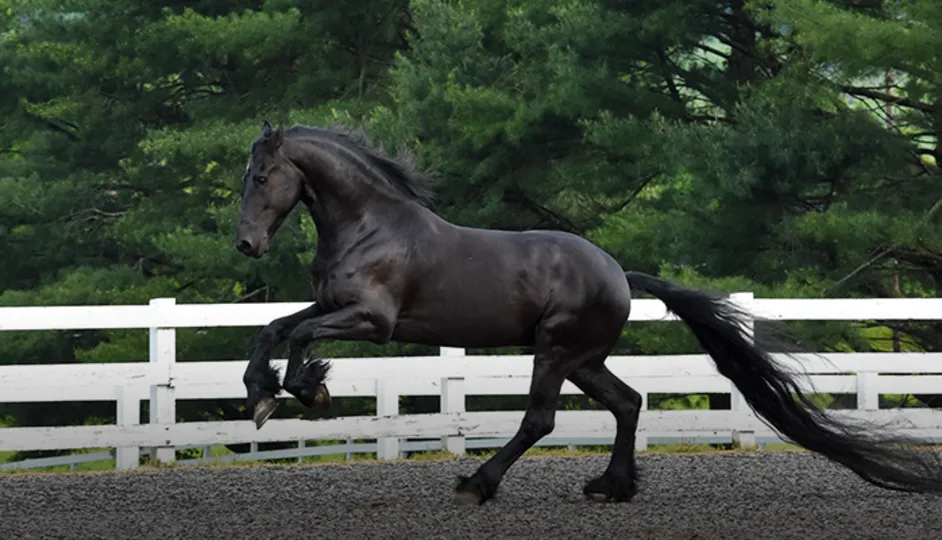 There are many things to love about Friesian horses.

They are beautiful, graceful, and gentle animals.

They are also very versatile, making them perfect for a variety of purposes.

If you are thinking about adding a Friesian to your family, here is some information that you need to know.

Here are some of the key things you need to know about the Friesian horse:

The Friesian horse originated in Friesland region in the Netherlands.

Over the course of its long history, the Friesian has been used as a warhorse to carry knights into battle, as a farm horse, and even in the circus.

The Frisians rode their own horses into war as early as the 4th century, according to anecdotal evidence.

Friesians are not thought of as draft horses since they were initially developed for warfare, and weren’t meant to pull plows in the fields.

Then in more recent history, they were used as fancy driving horses, and even more recently, some Friesians are bred for dressage.

They are likely more agile than a draft horse, but not as lively as a Warmblood.

Through trade and cultural exchange between the Netherlands and Spain in the 16th and 17th centuries, Andalusian blood was introduced into the Friesian breed, giving the Friesian horse a higher knee and a longer, more craning neck.

Although Friesian horses may have a long history, a studbook association wasn’t established until 1879, and a horse stud book wasn’t published until 1880.

It was at this time when purebred Friesian horses were in very limited supply; this was in part owing to the growth in popularity of a different Dutch horse breed called the Bovenlander.

In the 19th and early 20th centuries, Friesians were most often used as draft horses.

By the early 1900s, they were facing extinction since there were only three Friesian breeding stallions left due to the decline in the demand for horses and the increased use of automation in agriculture and industry.

However, the numbers increased through the 20th and 21st centuries due to efforts of the Friesian Horse society.

Owing to their attractive appearance, Friesians are often used on film like in “Alexander,” “Ladyhawke,” “The Mask of Zorro”, “Sense and Sensibility”, “The Chronicles of Narnia”, “Game of Thrones” etc.

The head can be short and delicate, but also long and baroque.

Concave profile is not desirable.

The ears are small.

The neck is upright, gracefully arched, and crested.

The withers are rounded, and the shoulder is sloping and long.

The hindquarters are powerful, and the tail is low-set.

The legs are strong, thick, and the joints are clean.

The hooves are hard.

The mane, the forelock, and the tail are long, thick, and occasionally wavy.

Thick feathering on the fetlock is a recognizable breed characteristic.

They trot with a lot of power, bending well at the joints.

The steps are high and very lengthy, providing a significant amount of “air time”.

The walk is forward and springy, and the canter is lively.

Friesians are almost always black, and no white markings are allowed.

Due to a recessive gene chestnut Friesian horses appear occasionally.

Friesians are generally healthy horses, but they are prone to several genetic issues:

1. Dwarfism with stunted leg growth and laxity of connective tissue

7. Aortic rupture in the aortic arch (not the root, as is more common)

8. Aortopulmonary fistula secondary to aortic rupture (blood leaking from the aorta into the lungs)