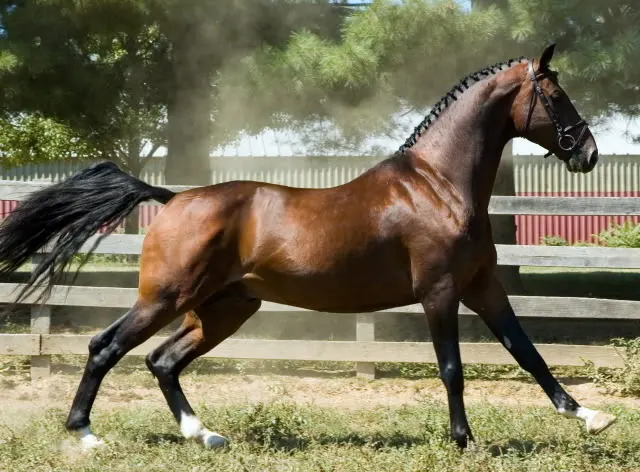 In motion, they are recognizable by their showiness and style, with distinctive high knee and hock action due to very good flexion of their joints. They have a distinct moment of suspension, and reach out their front legs from their shoulders with each stride. Their hind legs’ flexibility allow those legs to rise up, bending the hock, and reach forward to carry the weight of the body during each stride. This distinctively spectacular movement makes the horse seem to float effortlessly over the ground.

The Hackney has a well-shaped head, sometimes with a slightly convex profile. Their eyes are expressive and generous in size. Their ears are cleanly formed, usually sized proportionately to their head. The neck is carried arched and upright, arising high from the top of the withers. The chest is broad and well-defined, the shoulder is powerful, long and gently sloping. The horses have compact backs, muscular, level croups, and powerful hindquarters. Their ribs are well-sprung. The tail is set high and carried high naturally. The legs are strong with broad, clean joints, long forearms and gaskins, with hocks low, and pasterns medium in length, and are attached to round, tough hooves. The breed is known for its soundness and enjoyable gaits.

The Hackney Horse breed’s origins date to the 1300s, when the King of England required the breeding of powerful but attractive horses with an excellent trot, to be used for general purpose riding horses. Since roads were rudimentary in those times, Hackneys were a primary riding horse, riding being the common mode of equine transportation. The “Modern” Hackney Horse developed during the 18th and 19th centuries in Britain. The Hackney Horse of today is a first cousin to the Thoroughbred; the same three Oriental stallions who were used to develop the Thoroughbred were also bred to native mares with excellent trotting skills.

From these sources developed two earlier breeds, now extinct, the Norfolk Trotter and the closely-related Yorkshire Roadster, foundation stock for the general purpose horse that formally became the Hackney Horse. The Norfolk was also influential in the development of other breeds, including the Gelderland, the Furioso, the French Trotter, the Welsh Cob, the Maremmano, the Orlov Trotter, the American Saddlebred, and the Standardbred.

Both trotting breeds of horses were exceptionally fast, with great speed and endurance, tracing back to the stallion Original Shales, born in East Anglia in 1755. He was by the stallion Blaze, the son of the well-known racehorse Flying Childers who was a grandson of the great Darley Arabian (one of the three foundation stallions of the Thoroughbred breed). Original Shales sired two stallions–Scot Shales and Driver–both of which had a great influence on the Norfolk Trotter.

Robert and Philip Ramsdale, father and son, took the Norfolk horses Wroot’s Pretender and Phenomenon to Yorkshire, where they bred them with Yorkshire trotting mares. The offspring were the basis for the Hackney, and by 1833, the Hackney Horse Society was formed in Norwich and had opened its studbook.

When the railways were developed, the Norfolk and Yorkshire Trotter numbers declined, eventually being integrated into the Hackney Horse we know today. The showiness of the Hackney Horse, however, saved it from extinction, and began its use in the show ring. They are still extremely successful in harness, and can also produce very nice riding horses, many known for their ability in show jumping and dressage competition.

The Hackney Pony was developed in the late 1800s, when small Hackney Horses were bred to various pony breeds in order to create a very specific type of show pony.

Alexander Cassatt was responsible for the introduction of the Hackney Pony to the United States. In 1878 he acquired 239 Stella in Britain and brought her to Philadelphia. In 1891, Cassatt and other Hackney enthusiasts founded the American Hackney Horse Society. The organization and registry continues to this day with its headquarters now in Lexington, Kentucky.

Many breeds have been strongly influenced by the Thoroughbred, the Hackney Horse is one of these. The most superb examples of Norfolk Trotter were traced to Shales, a son of the great race horse, Flying Childers. Therefore, the Hackney is descended from the Darley Arabian, foremost among the foundation stallions of the Thoroughbred. A Norfolk Trotter was imported to America in 1822. He proved a major influence in the founding of the Standardbred breed.

The Hackney breed is uncommon worldwide, with a global population of perhaps 3,000. The majority of the horses are found in Britain, with fewer than 200 Hackney horses in North America and about 300 in Argentina. The breed type varies from place to place and strain to strain. Most strains have had recent introductions of Thoroughbred blood, and the British studbook allows a limited amount of this crossing. Relatively few strains retain the pure genetics of the historic Hackney breed, and these are a conservation priority.