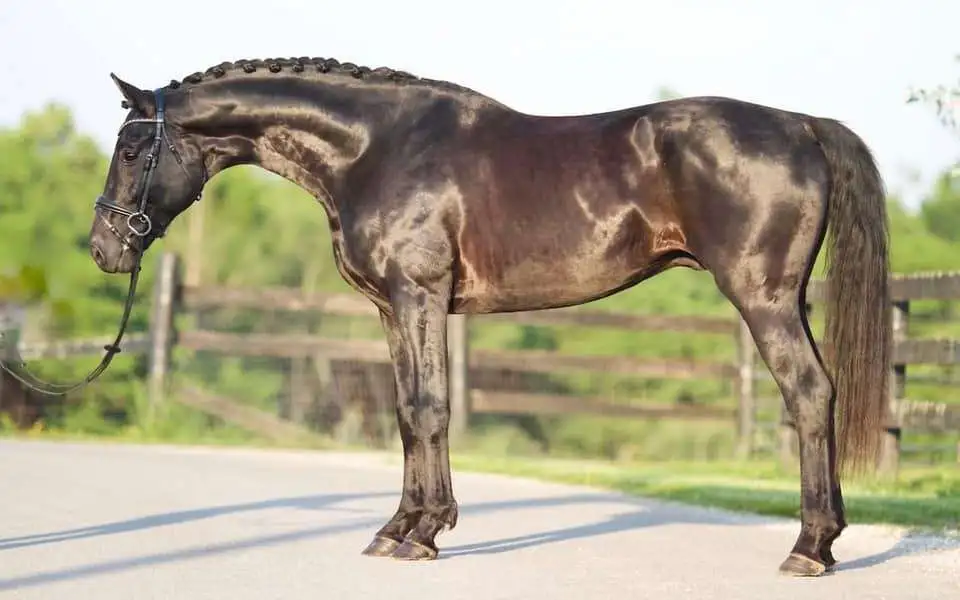 A Hanoverian is a warmblood horse originating in Germany, which is often seen in the Olympic Games and other competitive English riding styles, and have won gold medals in all three equestrian Olympic competitions. It is one of the oldest, most numerous, and most successful of the warmbloods. Originally a carriage horse, infusions of Thoroughbred blood lightened it to make it more agile and useful for competition. The Hanoverian is known for a good temperament, athleticism, beauty, and grace.

Irrespective of their unusual colour, their antiquity, and the fact that until Hanover ceased to exist as an independent state, the whites and the creams were respectively the horses of the king and queen, there is nothing extremely remarkable about them. They were all tall, powerful animals, rather inclined to coarseness, and not particularly good about the shoulders, but no doubt serviceable if put to work, which, however, they very rarely were. Their tails, which were squared, extended down to their heels, and their manes were correspondingly long.

The horses are elegant, strong, and robust. They are bred to be willing and trainable, and have a strong back, powerful body, athletic movement, and strong limbs.

The customary process is that breeders of like interests and breeding aims unite and form an association, start a studbook and establish rules and regulations governing registration. That is, however, not the way it happened in Hanover. There, it all started with the foundation of the Landgestuet in 1735, the State-operated stable of stallions. Since its inception the Landgestuet has kept careful records of pedigrees of their stallions and the mares bred to them, so that when in 1888 the Royal Agricultural Society officially created the “Hanoverian Warmblood Stud-book” it had already an excellent basis on which to build.

In 1899 the Chamber of Agriculture took over as keeper of the studbook, and it carried on until 1922 when it passed these duties on to the Verband hannoverscher Warmblutzüchter (the Society of Hanoverian Warmblood Breeder), which came into existence that same year and is the governing body today. So the “Verband” came into being in 1922 through the unification of 54 local breeding clubs, which at that time existed in Hanover, and of which some were over 50 years old. Combined, they accounted for more than 10,560 breeders. The idea was not so much to rob these clubs of their independence and their individual, peculiar character but rather to co-ordinate their activities for the good of all.

The success of Hanoverian horses in competition proves the soundness of the breed – 13 medals in the 1992 Olympics and four consecutive World Breeding Championships as well as five gold, one silver and two bronze medals in dressage and show jumping at the 1996 Olympics.