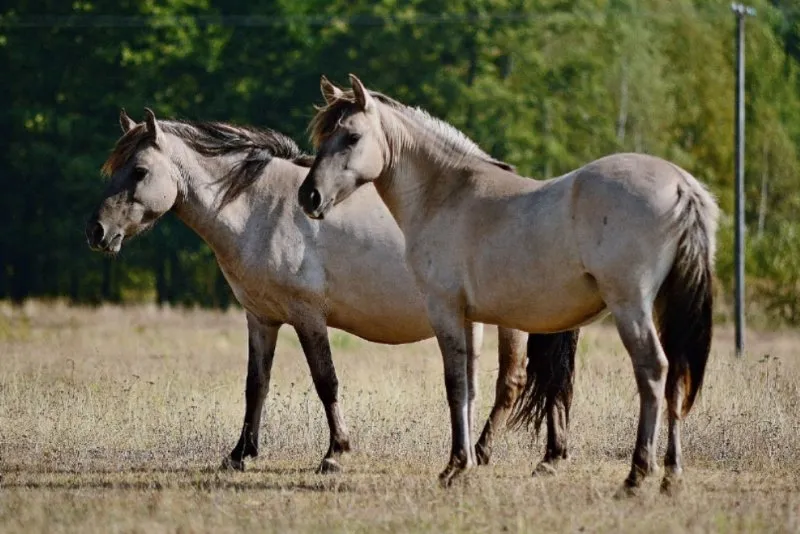 The Konik horse is a Polish breed of feral horse.

They are also popular with trail riders and wilderness photographers.

Here’s everything you need to know about this interesting breed!

Here are some of the key things you need to know about the Konik:

The Konik is a small, semi-feral horse that hails from Poland, and is descended from tough horses from the Biłgoraj region.

The way they graze is useful in managing habitats for the benefit of other species, which in turn increases biodiversity.

It is now well accepted that the grazing behaviors of the Konik play an important role in improvement of the habitability of wetland environments for a variety of other species.

It was long believed that the Konik descended directly from the Tarpan, the wild European forest horse hunted to extinction.

Tarpan lived in Central Europe until the late 1800s, when the last were caught in the primeval forest of Bialoweiza in Poland, and transferred to zoos.

Recent genetic research refutes the theory that Konik is a surviving form of Eastern European wild horse the Tarpan, nor is it closely related to it.

It turned out that the Konik shares mitochondrial DNA with many other domesticated horse breeds, and their Y-DNA is essentially similar.

Following the Nazi invasion of Poland in 1939, whole herds of Konik horses were captured and sent to Germany, where they were used in genetic research aimed at re-creating the German Tarpan.

Scientists in Poland were able to save several wild horse herds during World War II, and those animals were permitted to repopulate national parks under Soviet rule.

After the fall of the Iron Curtain in 1989, conservationists were finally able to move the wild horses to national parks around Europe.

In 2002, Wildwood Trust was the first to introduce these horses to the United Kingdom.

Since their arrival in Southern England, these horses and their descendants have been instrumental in restoring some of the most important national nature reserves in the United Kingdom.

Their grazing activities contribute to the creation of excellent living conditions for a variety of animals, including rare geese, spoonbills, bitterns, and corncrakes.

Besides the UK, they have been successfully introduced into the nature reserves in the Netherlands, Germany, France, Belgium and Ukraine.

Between the two world wars, German brothers Heinz and Lutz Heck used Konik horses and several other breeds to try and recreate the extinct Tarpan.

The project was not successful, but they managed to create a new breed which was given the name the Heck Horse.

Other breeders worked to improve the riding qualities of their Koniks by breeding them with Anglo Arabians or Thoroughbreds.

The ongoing management of Koniks in both stables and reserves allowed for a comparison of the horses’ health and behavior under varying conditions.

Koniks that are kept in barns, for example, are more likely to develop foot disease and hay allergies.

The head is small with a straight profile.

The neck attaches low on the chest, which is deep.

The mane is thick and black in color, and can sometimes have lighter sections in it.

The body is stocky and strong.

Their coats are a mousey gray color called “blue dun”, and they have black faces and legs.

They show primitive markings, including a dorsal stripe, and occasional leg stripes.

Extensively used for conservation grazing on nature reserves throughout Europe

Very hardy horses from the Biłgoraj region in Poland