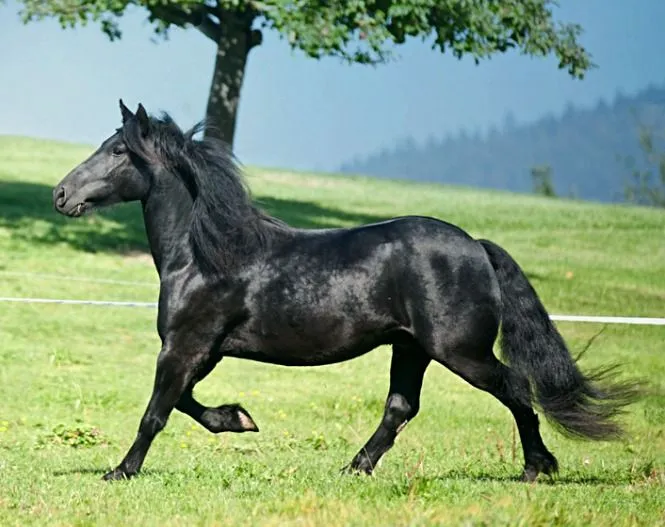 Think of the Mérens Horse as the perfect blend of strength, agility, and endurance.

This rare breed is known for its sure-footedness in mountainous regions and its ability to cover long distances quickly.

If you’re thinking about adding a Mérens Horse to your stable, here’s what you need to know.

Here are some of the key things you need to know about the Mérens Horse:

Over the years, people of all kinds, even smugglers, have used the Mérens to transport goods over the mountains.

Because of their geographic seclusion in the mountains, the Mérens have had very little contact or interbreeding with other breeds.

Although the breed’s early history is unknown, it is believed that the Mérens horse originated in ancient times.

Like many other breeds native to the Pyrenees, it is possible that the Mérens is of Iberian ancestry.

According to another idea, the Mérens are derived from Oriental horses brought to Ariège by settlers from the east, based on their straight or concave face profile (as opposed to the convex-profiled Iberian horses).

It is however generally thought that its ancestors have lived in the Pyrenees mountains close to Andorra for at least 15,000 years, ever since the end of the most recent Ice age.

In the cave of Niaux at the northern foothills of the Pyrenee in the south of France, there are cave paintings dating back 13,000 years and portraying horses that are remarkably similar to the Mérens.

Since the breed has such strong ties to its place of origin, it is no surprise that it features in many local legends and stories.

Local farmers, miners and winemakers have been relying on these horses for centuries prizing their stamina, sense of direction, agility, soundness and ability to survive on substandard fodder.

Mérens horses were highly valued by warriors in the Middle Ages, and also favored by Charlemagne during his reign (768 – 814).

Although they developed a reputation as superior light cavalry horses in the late 19th century, unchecked crossbreeding had a significant negative impact on the population during the same time.

In order to conserve the Mérens, the president of the Agricultural Society of Ariege was put in charge of breeding in 1908.

This turned out to be a wise decision since it helped the species survive both World Wars, when many other European breeds were in danger of becoming extinct.

However, once WWII ended and the Mérens weren’t needed for pulling the artillery in the mountains any longer, their numbers started to decline.

Even though the Mérens was used in farm work and in meat production their numbers dropped to only 40 by the 1970s.

They would have probably gone extinct hadn’t been for the groups of hippies who moved to the Ariége mountains to get away from mainstream society.

They boosted the local economy, and also continued breeding these beautiful black horses.

At the same time, there was a campaign made to popularize the Merens as a trendy pleasure horse.

To this day the Mérens has remained an important part of France’s horse breeding program.

Even though it only accounts for around 2% of the country’s overall horse population, it is regarded as vital to the maintenance of French breed variety.

Many Mérens spend all or part of the year living in semi-feral conditions in their native mountains.

Their stature is compact, yet elegant, and their movements are energetic.

The head is straight or slightly concave, with small ears.

They have a ‘beard’ along their jawbone.

The neck is mid-length or short, and well-muscled.

The shoulders are sloped.

The chest is deep and broad, and the withers are wide.

The girth is deep, and the croup is strong.

The legs are strong and short, and the fetlocks feathered.

The hooves are large and solid and they can go barefoot.

They are very surefooted and agile and can work on the steep slopes with ease.

Mérens are classified into two types: the original type, which is a smaller, lighter horse ideally suited for mountainous terrain, and the taller sportier modern type.

They are similar in appearance to both the Norwegian Døle Gudbrandsdal and the British Fell and Dales ponies, even though it has never been crossed with the Friesian (like the Dales and Fell pony).

They are always black in color, but in the winter they might have a reddish coat

Can live on poor fodder