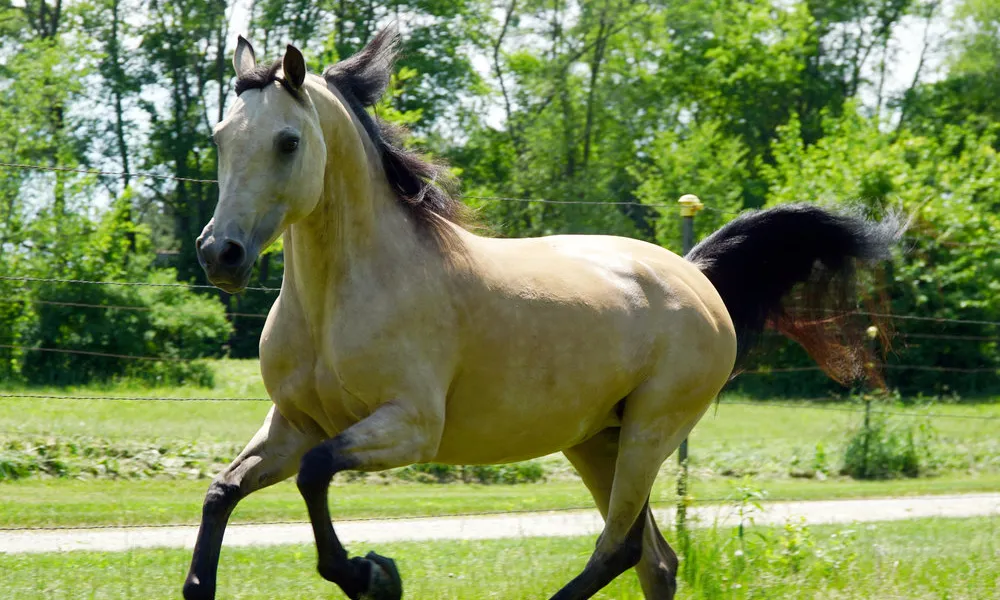 Some people think Morab horses are just a cross between a Morgan and an Arab, while others believe they are their own unique breed.

So, what is actually the truth?

Let’s explore everything you need to know about this fascinating horse.

Here are some of the key things you need to know about the Morab:

The most common misconception surrounding the Morab is their classification as a breed.

Many people have an inaccurate conception about Morabs and incorrectly refer to them as half-breeds.

Actually, the exact opposite is true.

Morabs, who are the offspring of an Arabian and a Morgan breeding, are not to be confused with half-Morgans or half-Arabian horses.

They are a specific breed, and have been shown to be capable of passing on their distinctive traits to their offspring in a way that is reliable to a high degree.

Only first-generation Morabs are dual-registered as both Morab and either 1/2 Arab or 1/2 Morgan, thus, they were a triple-registered animal.

In subsequent generations, Morabs were only crossbred with other Morabs to guarantee the continued development of the breed.

History of the Morab breed

In the article, he suggested crossing Morgans with Arabian mares if pure-blood Morgan mares were unavailable, leading to a cross which became known as the Morab.

As the Morgan studbook was not yet closed at the time, some early Morabs were registered with the American Morgan Horse Association, and these horses have been completely integrated into the Morgan breed.

Golddust, a renowned trotting horse, who was undefeated in harness racing, is considered to be the first Morab in recorded history, and was a descendant of these crosses.

He sired 302 foals, and more than 100 Morab horses may be traced back to him today.

He was a magnificent horse whose pedigree reveals that he was a Morab listed as #69 in the Morgan registry.

Golddust was bred in 1855 by Andrew Hoke from Kentucky and L. L. Dorsey of Eden Stock Farm purchased him as a weanling for $100.

Golddust’s sire was Vermont Morgan, and his dam was a daughter of a chestnut Arabian stallion named Zilcaadi who was a gift from the Sultan to Mr. Rhind, a United States consul that imported him to the States.

In the 1920’s William Randolph Hearst had a short, but significant Morgan and Morab breeding program.

He was the one who first started using the name ‘Morab’ to describe the versatile Arabian-Morgan horses he bred to work the rugged and hilly terrain of his San Simeon Ranch in California.

On their SMS Ranch in Texas, the Swenson Brothers also established a Morab breeding program.

They used their program to produce a number of noteworthy Morab horses from a starting stock of three Arabian stallions, seven Morgan brood mares, and two Morgan stud colts.

In the 1950s, Martha Doyle Fuller of Clovis, California created a Morab breeding program in an effort to produce a horse that would do well on the open show circuit.

She tried with other breeds as well, but the Morab was the only one that, in her eyes, met the requirements.

Her daughter, M. Ilene Miller, established the first Morab registry in 1973 based on the foundation of her mother’s successful breeding program.

Before this, most Morabs were unregistered horses that were bred purely for type.

In order for a horse to be registered as a Morab, it can have no more than 75 percent Arabian blood and no more than 25 percent Morgan blood, or vice versa.

The head is elegant and refined with a concave profile.

The forehead is somewhat wide.

The jaw is prominent, and the muzzle is bigger which is typical of Morgan influence.

The neck is arched, strong and deep-set.

The shoulder is sloped, and the chest is broad and deep.

Due to the Morgan-influenced bone structure, legs tend to be fairly thick, however they have comparatively short cannon bones.

The hooves are solid and well-developed.

The mane and tail are thick, and the tail is carried high which is indicative of both Morgan and Arabian parentage.

The hindquarters are powerful with substantial muscle and bone, which gives them an advantage in a wide variety of sports.

They inherently have a better cardiovascular and respiratory system than other breeds.

The Morab is a small, powerful breed that combines the best of two worlds: the Arabian’s refined sensibility and the Morgan’s unyielding strength and endurance.

The Morab has a shorter back and a notably smooth walk due to having one less lumbar vertebra than other breeds, like both the Arabian and the Morgan.

The Morab is renowned for its floating trot.

Pinto and Appaloosa patterns are not permitted. White markings on legs and face are allowed.

Some Morabs can have the sabino spotting patterns because they were present in some of the Arabian lineages utilized to form the Morab breed.