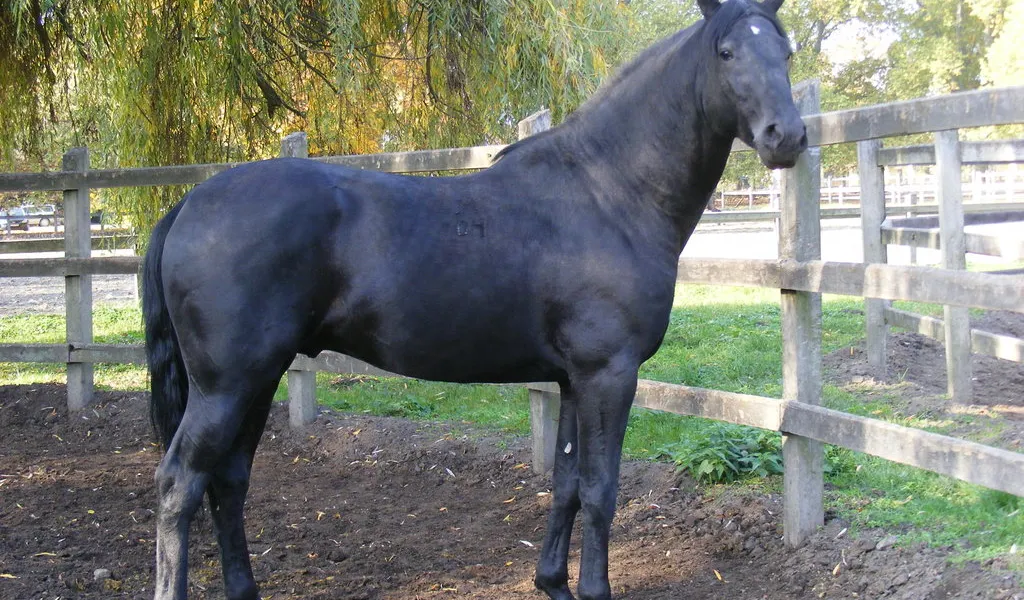 There are many horse breeds that exist around the world, each with their own unique set of characteristics and purposes.

The Nonius horse is a breed that is lesser-known, but nonetheless fascinating.

Keep reading to learn everything you need to know about this intriguing equine!

Here are some of the key things you need to know about the Nonius:

This heavy-boned Warmblood breed is named after its foundation stallion Nonius Senior, an Anglo-Norman horse foaled in 1810 in Normandy. In 1816.

During the Napoleonic Wars, he was captured at the French Stud Rosières-aux-Salines and brought to Mezőhegyes, the State Stud of the Hungarian Royal and Imperial Court.

Depending on the story, Nonius was either an unremarkable looking horse or a living collection of conformation flaws, so it was only after he produced a few foals who were quite the contrary that he became an influential sire.

His offspring were not only handsome, but they were also powerful and had a lot of stamina.

When crossed with mares of Spanish, Neapolitan, and Arabian loodb, a consistent ‘Nonius’ type started to develop.

Nonius Senior was bred at Mezőhegyes stud for 26 years.

In addition to the contribution of a few Arabian and Thoroughbred stallions, careful line breeding was crucial in establishing the breed’s traits.

The result was a dark, heavy, muscular, and elegant horse that was perfect for the Hungarian military, but also pulling carriages and carts.

Despite its widespread popularity in Hungary, until World War II when machines began to replace horses in the army, the Nonius remained a breed largely utilized by the Hungarian military.

At this time, the breed’s emphasis changed from livestock to agricultural work, and another Hungarian state stud developed a second, heavier ‘type’ of the breed.

Unfortunately, there were relatively few Nonius horses surviving after World War II, and Hungary was not very supportive of horseback riding in general during the communist period.

Between the late 1940s and the early 1960s, many Hungarian horses were slaughtered for meat.

Fortunately, some breeding programs survived, and in 1961, the two subtypes of Nonius were merged into a single breed when interest in pleasure riding and driving started to increase again.

Despite the fact that efforts to make sport horses from Nonius stock were not successful, the Nonius breed proved to be particularly good in the combined driving sport that was becoming more popular.

The Nonius Horse Breeders National Association was established in 1989 with the goal of preserving the breed, and ever since then, their numbers have been steadily increasing.

Although the Nonius may be found in smaller numbers in the countries neighboring Hungary, the majority of the horses are still in their homeland.

The head is heavy, featuring a roman nose.

The eyes are large, and ears are alert.

The neck is strong, high set and arched.

The shoulders are slipped and muscular.

The chest is wide, and the back is strong and short.

The girth is deep.

The hindquarters are powerful.

The legs are sturdy with big joints.

The hooves are round.

The tail is high set, and both the tail and mane are thick.