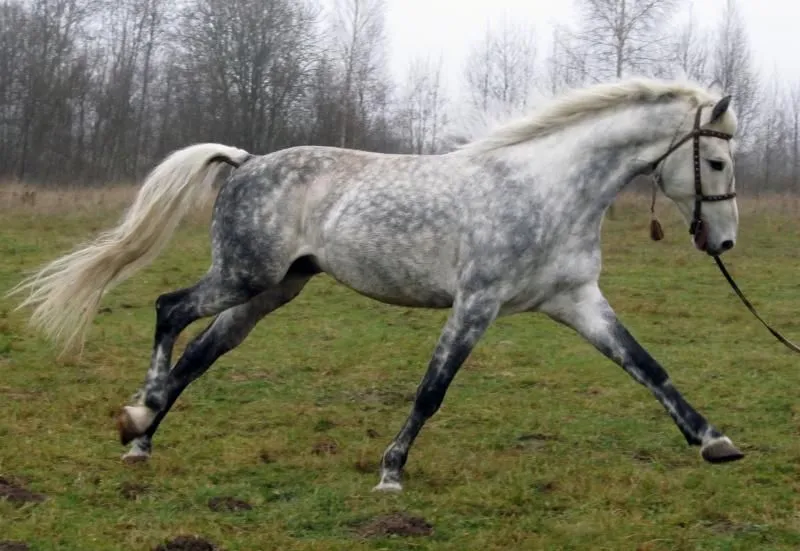 This breed originated in Russia, and was specifically bred for use as a carriage horse.

Today, the Orlov Trotter is used for many different purposes, from harness racing to trail riding.

This rare horse breed is known for its beauty, athleticism, and docile temperament.

Keep reading to find out more about this amazing horse!

Here are some of the key things you need to know about the Orlov Trotter:

Count Alexei Grigoryevich Orlov is credited with developing the breed with the intention of creating a light harness horse that had both speed and endurance.

In addition, the breed had to be hardy enough to survive in the severe weather of Russia, and the horses had to be sound enough to travel on the poor-quality roads.

After acquiring an Arabian stallion from a Turkish admiral, Count Orlov began developing what would become known as the Orlov Trotter.

This stallion was bred to a Friesian mare, and the resulting foal, Bars I born in 1784, is considered to be the premier stud for the breed.

In central Russia, Count Orlov’s Khrenovsky Stud could house up to 3,000 horses at once for the breeding program.

He was very protective of the breed and would only sell geldings.

However, 20 years after Count Orlov passed away, the practice was abandoned and stallions began to be sold to private owners.

After the 1830s, the Orlov Trotter began to spread across Russia and quickly became the most popular breed of harness horse, used for both racing and transportation.

During the mid and late 1800s, the Orlov Trotter became a prominent harness racing horse.

These horses were able to outperform the very finest horses in both Russia and Europe.

The breed impacted almost all other breeds in Russia and was crossed with Standardbreds to produce the Russian Trotter.

As automobiles gradually replaced horses as the primary form of transportation, there was a corresponding rise in the value placed on speed, a quality essential in racing.

As a result of the fact that Standardbreds and Russian Trotters are, in general, faster than Orlov Trotters, there was a decline in public interest in the breed even as the studs were being re-established.

In the late 19th and early 20th centuries, an unregulated inflow of American Saddlebreds led to a decline in population, necessitating the protection of the breed.

In the subsequent years, Count Orlov’s breed suffered greatly from crossbreeding, World Wars, the Civil War, as well as the general decline of the nation’s agricultural industry.

After the Civil War (1917 – 1923) the harness racing resumed in the 1930s, but these sturdy horses were also used in farming and as transportation animals.

Massive efforts were required to restore this and many other breeds, and success was slow throughout the 20th century.

The breed’s popularity has been restored in large part because of the efforts of the International Committee for the Protection of the Orlov Trotter, which was founded in 1997.

The head is big with large and expressive eyes.

The neck is long and high-set.

The chest is deep and wide.

The shoulders are sloped.

The withers are prominent, and the croup is wide.

The back is long, and the body is muscular.

The legs are clean with well-defined joints and tendons.

Overall it is a hardy, well-proportioned and elegant breed, with a light but powerful build.

The Orlov Trotter is known for its very fast trot, and remarkable stamina and power.

Dubrovski, Novotomnikov, Khrenov and Perm are the four subtypes of the breed, each of which originated in a different region of Russia.

Most commonly gray, but black, bay, and chestnut are also seen