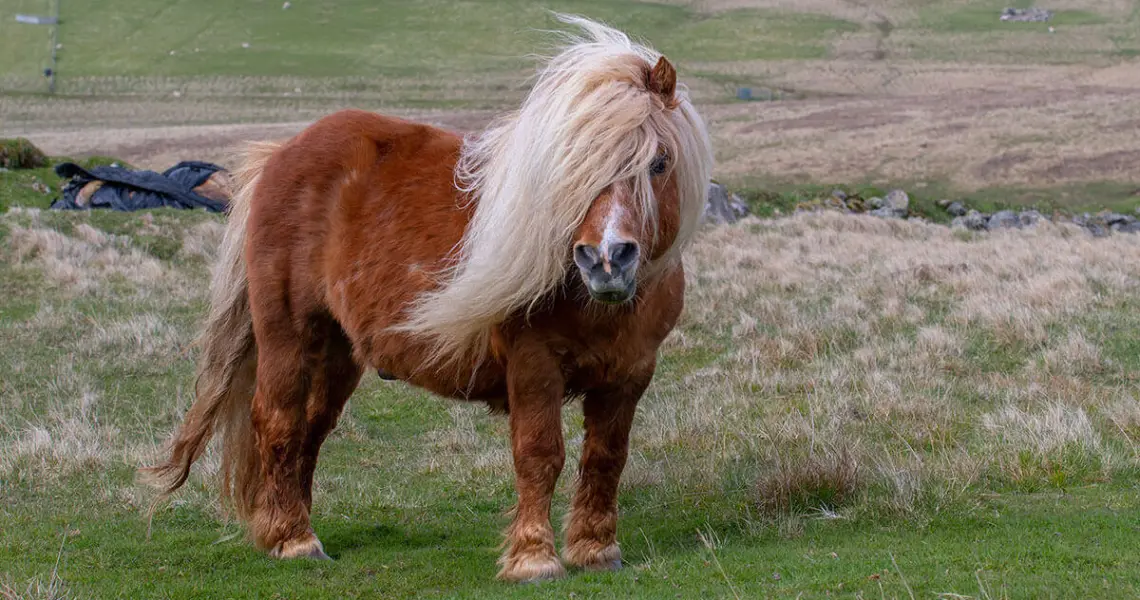 The Shetland Pony breed is a small, sturdy equine that is popular for its gentle nature and good temperament.

They are often used as children’s ponies and are one of the most popular breeds in the UK.

If you’re considering getting a Shetland Pony, here is everything you need to know about this adorable breed!

Here are some of the key things you need to know about the Shetland Pony:

Shetland Pony is today one of the most popular ponies in the world, named for the islands where it originated.

The Shetland Islands, which are located in the North Atlantic Ocean off the shore of Scotland’s northern coast, are characterized by sparse vegetation and harsh weather conditions.

The thick hair, long mane, and forelocks were the only things that kept the Shetland Pony protected from the weather for many centuries as it lived out in the open.

History of the Breed

Even though the exact origin of the Shetland pony is unknown, they were probably influenced if not originated from the Celtic pony, brought to the islands as far back as 2000 – 1000 BC.

The inhabitants of the islands most likely eventually crossbred their ponies with the ones brought over by Norse settlers in the 8th and 9th centuries.

The severe environment and lack of food contributed to the ponies’ development into very resilient creatures.

The Shetland Islanders tamed the ponies so they could use them for labor-intensive tasks.

The pony was used to transport peat from the bogs to the houses so that it could be used as a fuel source.

In addition to that, they transported seaweed from the coast to the fields where it was used as fertilizer.

Shetland ponies were also used for pulling carts, as well as for plowing fields.

Shetlands as the ‘Pit Ponies’

The Shetland Pony is widely acknowledged as the world’s most powerful equine in relation to its size.

As a result, when the coal mining industry became widely established in Britain in the 1800s, Shetlands were brought in large numbers to pull coal cars in the ‘pits’.

In the years that followed, a significant number of Shetlands were sent to the United States to work in coal mines there.

The mines were the birthplace and last resting place for many of these horses. Some actually never saw the light of day.

However, by the mid 20th century the mechanization rendered the Shetland ponies obsolete in the mines.

The breed organization for the traditional Shetlands around the globe is the Shetland Pony Stud-Book Society.

It was established in 1890 with the goals of preserving purity of the breed, and encouraging the production of high-quality animals.

The Shetland Islands Premium Stallion Scheme was established in 1957 with the purpose of providing financial support to high-quality registered stallions in order to enhance the quality of the breeding stock.

Shetlands are ridden by children today, and are shown at horse shows in harness driving classes by both children and adults.

Young children ride Shetlands for fun, in horse exhibitions, and at stables and riding schools.

They are often found at fairgrounds and provide short rides for visitors.

In addition to this, you may find them in petting zoos, and in certain cases they are used for therapeutic equestrian riding.

Shetland ponies are also used in the Shetland Pony Grand National, which takes place in the United Kingdom.

This event involves young jockeys racing around a racetrack on the backs of the Shetland ponies.

Some Shetland ponies still perform traditional work on the islands, and may be seen carrying peat in big saddlebags.

Peat is plentiful and it is used as a fuel source in Shetland.

Even in the era of advanced mechanization, their robust build and capacity to traverse a range of challenging terrain make them a viable option for this job.

Gentle, even-tempered, however many describe them as cheeky and strong-willed

The Shetland is perhaps the strongest horse compared to its size, however even the stallions are docile and gentle.

The head is small, with eyes that are set wide, and small ears.

The neck is muscular and short, and the girth is deep.

The body is compact, and the back is wide and short.

The legs are short and muscular, and the cannon bone is shorter than normal in relation to their size.

It has a thick tail, forelock, and mane, and double winter coat.

A universal characteristic is their springy stride.

They are long-lived, and it is not unusual for them to live longer than 30 years.

Most commonly black and dark brown, but many colors are seen in this breed

Shetland Island in the United Kingdom