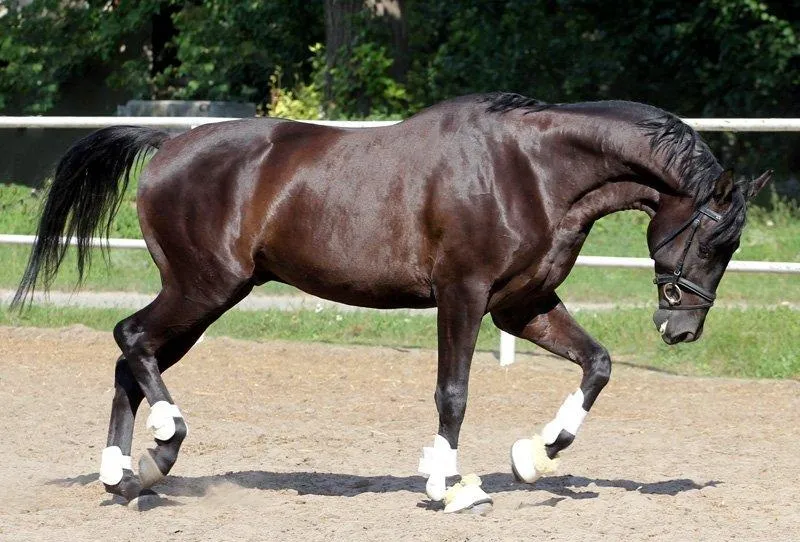 Their breeding began at Ukraine stud in Dnepropetrovsk region and subsequently continued mainly at Aleksandriisk, Derkulsk, Dnepropetrovsk and Yagolnitsk studs. The Ukrainian Saddlers are now bred mostly for sport. They are large heavy saddle horses. The head is well proportioned, the eyes expressive; the straight neck is long, as is the poll; the withers are prominent, the back long and flat, the loin broad and deep, the body heavy and the limbs well set. The build is solid.

The first saddle breed that developed in Russia at the end of the 18th century was the Orlov, developed by Count A.G. Orlov in the Khrenov stud. Two separate strains were produced through the use of two stallions: the bay Arab, Sultan and the grey, Smetanka wich was though his son Polkan, the foundation sire of the Orlov Trotter.

In the beginning of the 19th century, Count Rostopchin developed another saddle breed which was given his name. He imported four Arab stallions and crossed them with Karabakh, Kabarda, Persian, and Don mares.

In 1845, the Khrenov stud and the stud of Rostopchin were purchased. As a result Rostopchin mares were mated to Orlov stallions. The new breed produced by this cross was called Orlov-Rostopchin. In 1883, these horses were used to breed large, elegant saddle horses for the army. They were also in great demand as an improver of other breeds such as the Don, Strelets and steppe breeds of eastern Russia.

During the First World War and occupation of the Ukraine, nearly all of the Orlov-Rostopchin stock was destroyed. In 1931, work was begun to reestablish the breed. However, after the Second World War, only two purebred stallions and one mare remained.

In the first stages of the breed rebirth, pure and halfbred Thoroughbred, Arab and Akhal-Teke horses were used with the small number of Orlov-Rostopchin individuals remaining.

After eight years of work, the efforts proved successful and the the Ukrainian Saddle Horse emerged in the studs of the Ukraine by the blending of individuals that carried the blood of the Orlov-Rostopchin with Trakehner, Hanoverian and Thoroughbred stallions. Breeding was started at the Ukraine stud in the Dnepropetrovsk region and further continued at Aleksandriisk, Derkulsk and Yagolnitsk studs.

The best of the young stock were taken for breaking and training at the age of 18 months. 2 and 3 years old were tested on race-courses as well as in other competitive events such as dressage, cross-country and show jumping. The most promising of these were subsequently used at stud. Today, breeding is mainly of pure stock with corrective crossing to the Thoroughbred.