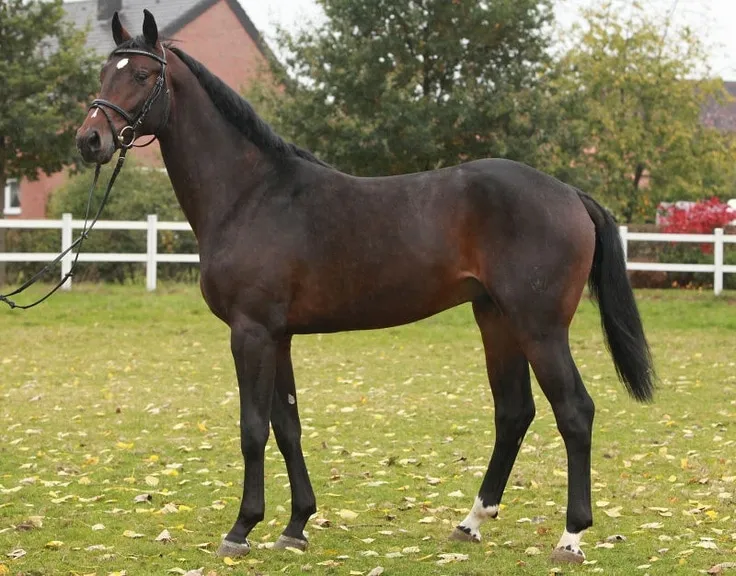 The Westphalian is a warmblood horse that originated in Germany.

In the past this versatile breed was used for everything from light cavalry to draft work.

These horses are quite versatile and perform well in the dressage arena and show jumping.

If you’re thinking about adding a Westphalian Horse to your stable, here’s what you need to know.

Here are some of the key things you need to know about the Westphalian:

The Westphalian horse breed was first developed in Germany in the early 1800s as part of an initiative to improve the country’s cavalry horses.

These horses were bred at a stud farm in Warendorf with the purpose of making them suitable for the cavalry as well as for use as saddle horses for nobility.

Even though the Trakehner ultimately became the preferred cavalry horse of the Prussian army, there was a desire in the Rhein region for a bigger horse that could also do farm work.

To satisfy the market’s need for a heavier type, the Westphalian was crossed with larger, cold-blooded horses.

The resultant light draught horse was suitable for either riding or driving.

All of the older pedigree records that had been so meticulously recorded were destroyed during World War II, so the breeders had to rely on memory to preserve the breed.

Breed inspections resumed in 1946, and breeders of Westphalian horses concentrated on creating horses that were both incredibly rideable and athletic.

In the 20th century the demand for horses once again shifted as a result of mechanization, and the new emphasis was placed on horses that were better suited only for riding.

The strategy of the breeders was altered, and they began to use Hanoverian blood in their efforts to make the Westphalian lighter.

While other registries have divided their breeding stock into jumper-type and dressage-type horses over the course of the last decade, the Westphalian verband has resisted the trend toward specialization.

Westphalians, on the other hand, are bred to be excellent movers with great rideability and jumping ability for a market of largely amateurs who value adaptable, agreeable horses.

Rhinelander and Westphalian colts are licensed at Warendorf State Stud in November. Each horse is scored on overall confirmation, its gaits and the performance in loose jump.

The licensed stallions are then sent to a testing facility for 30 – 70 days to be trained by professionals.

During the course of the training, both the trainers and the riders will have enough time to get familiar with the young stallion’s strengths and weaknesses.

The scores provide an indication of their capacity for dressage, jumping, their robustness, rideability, willingness, and their temperament.

Registered Westphalians have a shield with the letter “W” in the middle branded on their left hip.

This breed is similar to the Hanoverian in appearance, but its body is more robust.

The Westphalian is bred with the intention of developing a horse that is not only very athletic but also very rideable.

The Westphalians share a lot of genetic material with the neighboring Rhinelander and Hanoverian and are bred to the same standards as the other German Warmbloods.

A pleasing, long-lined, correct riding horse with bold, expansive, elastic gaits that is ideal for all forms of riding owing to its temperament, character, and rideability is the requirement for all German riding horses.

They have elastic gaits, generous stride, and are very athletic.

They are generally sound and long-lived.

Any coat color can be registered, but they are most commonly bay, black, chestnut, and gray