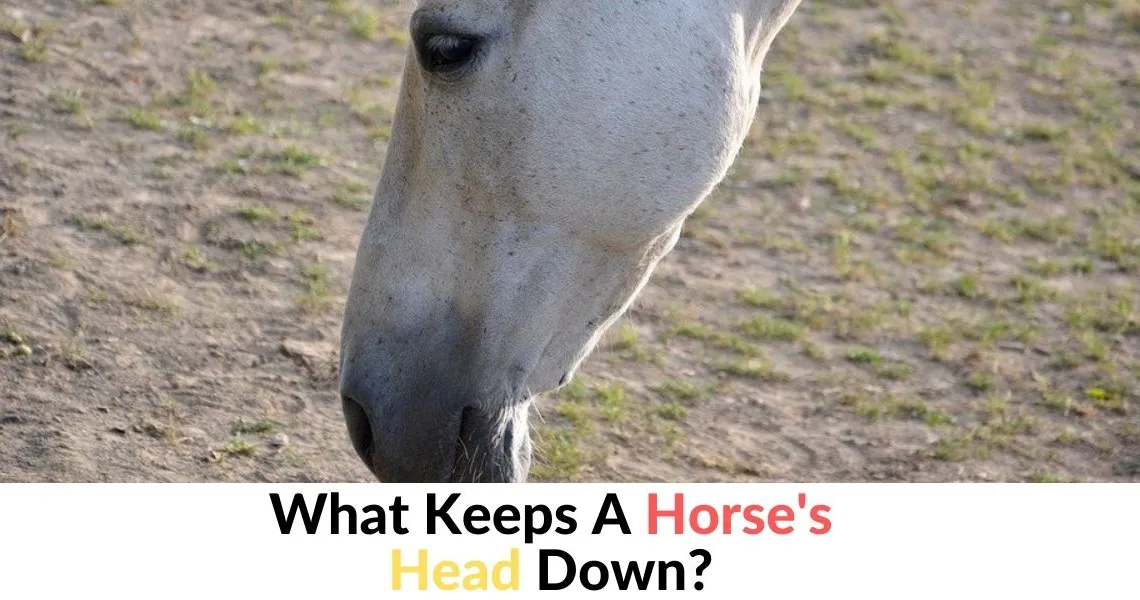 The main way to keep your horse‘s head down is by holding reins with one hand higher than the other. The hand that is on the inner side is pulled up, but the outside hand moves back down, causing the horse to drop his head.

For the “head down” cue to a horse, the rider needs to move the inside rein up toward the midline of the rider‘s body, below his chest, but above the belly button.

A dropped horse‘s head is usually a sign that the horse is relaxed and feeling good, and his ears will often hang to the side as well. If he’s standing in his stall or pasture with a lowered head, that means he’s probably either resting or asleep; calling his name and making the approach obvious so it doesn’t startle him would be the proper steps to take.

For amateur riders that are unable to hold the reins in such a position, repetition is the best alternative. The easiest solution to this situation is to continue to ask the horse to keep his head down.

It is simply not possible to keep a horse‘s head down all the time, so constantly asking the horse to lower the head in case he raises it will cause an eventual conditional response from a horse. This way, the horse will simply lower his head each time he is asked as a reflex.

The cue of keeping the horse‘s head down is one of the first commands taught on farms or training centres.

What does it mean when a horse puts its head down?

When a horse puts his head down on its own, it usually symbolizes that the animal is relaxed and calm, so does not need to be on alert regarding the rider or the surroundings. In essence, it is a gesture of trust.

In addition to lowering his head, the horse may express his content by hanging its ears on the side. This is a very positive sign from the animal that considers itself in good hands.

In contrast, when the horse is trying to loosen the reins by lowering and raising his head, it is a sign that the horse is not feeling safe nor comfortable and this behaviour is called rooting.

There are several useful tips and advice on how to keep the horse‘s head down:

The tips and advice come from ranchers and horse owners directly, so it is worth taking them into consideration.

How do you teach a horse to hold its head down?

Teaching a horse to hold his head down is also known as a “head down cue”. In addition to lowering the inner rein and raising the outer one, there are other, more detail-oriented ways to do this.

1. Step – Trot the horse without contact so he can stretch out his neck and body. This means the reins are long enough so there is not any pressure, or contact, in the hands of the rider from the horse’s mouth at the end of the bridle.

3. Work the horse in very simple bending patterns. Start with large circles, then vary the size of the circles. Using serpentines – snakelike patterns across the field horizontally – are also good bending exercises.

4. Add the outside rein for balance. Place slight pressure on the rein by pulling it toward the hip. This balances the horse to keep him from turning to the inside while the inside rein is being squeezed. At the same time, bring the horse back into the bridle by squeezing him forward with the legs and taking up light contact with reins. One should feel contact with his mouth because his hind legs are reaching underneath him, his back is rounded with uplifted abdominal muscles and he is propelling himself forward into the bit and bridle, lifting his shoulders and flexing his upper muscles – thus creating a lower headset.

The advice listed is one that professional riders use and the entire process is described in detail.

Why does my horse hold his head so high?

When a horse carries his head too high, it is probably because he is bracing his back (sometimes referred to as being inverted), and often his hind feet stay behind him, pushing his body forward.

When the horse is in good position, he rounds his back, and that allows his hind feet to step farther under him and carry, more than push him forward.

This habit can be changed in horses, but it requires a lot of patience and careful, gradual work. The horse‘s will protest, so it is best to keep these training sessions short, at least in the beginning, because the horse may get tired or irritated.

Horses usually raise or nod their heads in order to express dissatisfaction, excitement, pain or irritation.

Besides holding his head up as a habit, horses can also raise their heads to express fear or excitement, or plain ignorance, unaware that this position puts extra strain on the horse‘s muscles and puts him in an awkward, unnatural position.

Horses also raise their heads or nod when they are in pain because of an ear infection or insect bites.

In order to have a successful relationship with your beloved horse, the owner needs to understand the horse and its needs, and find a way to communicate with him. It will ensure that the owner or rider notices the first signs of any health issue or otherwise that may come up.