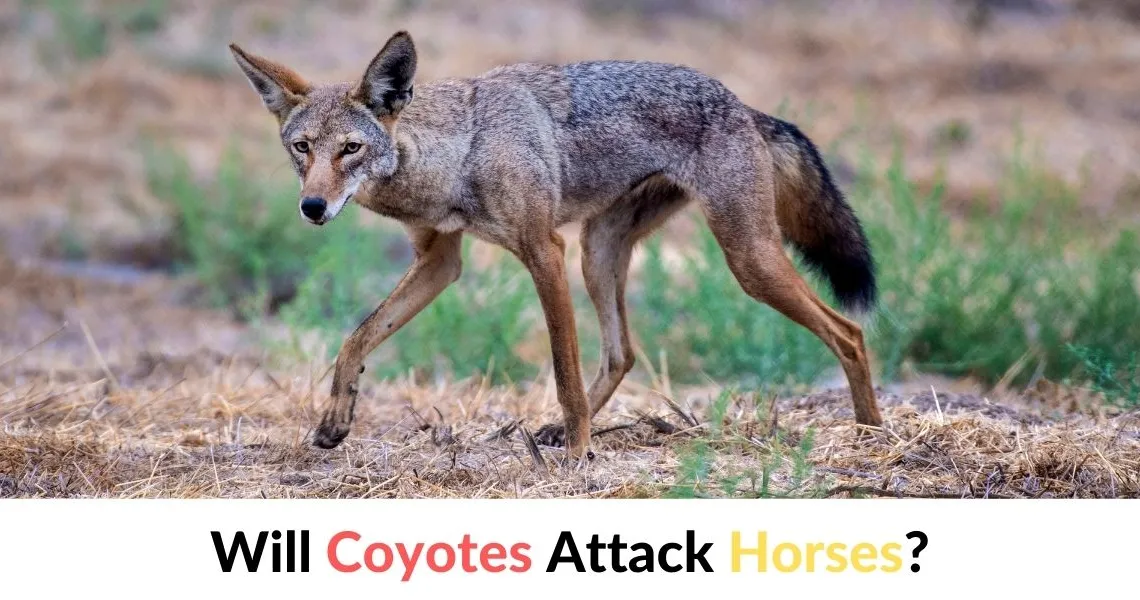 Any predators will chase or attack horses, and that’s what coyotes would do too.

Besides the fact that horses weigh 1000 pounds and coyotes 40 pounds, coyotes will still attack horses. Coyotes are predators, and that’s normal in their behaviour. If the horse is alone or in a smaller group it will be a great opportunity for coyotes to attack. The bigger and stronger horses can be kind of a big challenge for coyotes, so the smaller horses or foals and the miniature ones, ponies, would be an easy target for coyotes. They are widespread in so many locations, but there are some places that there are more coyotes than in other places. Coyotes can damage your horses, and even cause them a trauma.

How do I protect my horse from coyotes?

You can protect your horse from coyotes or any predator by making big fences around your farm, having dogs that will protect your horses or be an alarm for you to know that something is wrong, but nothing beats the Nite Guard Solar for nighttime protection.

Protecting your horses is very important if you want your horses to be safe and healthy. There are several ways to save your horses from predator attacks. First of all, when having a farm, you should consider leaving at least 20 – 30 yards of your field clear, all around meadows and paddocks. When your yard is clear there won’t be enough space for predators to stalk your animals before the attack. Fences could do a difference, especially if you put chicken wires around those fences too, so you keep your property from predators all sizes. Having a dog on your field will make a difference too. Dogs have a good sense of hearing and smell. If your dog isn’t shy to bark, it can be very helpful to alarm you that there is something dangerous approaching. Some dogs will attack the predators too. Nowadays there is something called Nite Guard Solar. It’s a portable device, that you can wherever you want, or on the places you know the predators usually approach. It’s based on emitting a powerful red light that for the predator looks like the light is some other predator’s eyes. When realising that they are another predator eyes the predator that’s attacking your animals will abandon their planned attack, because they think it’s possibly a more dangerous animal. So predators at the end refuse to hunt in such circumstances.

What animal would attack a horse?

Mountain lions, wolves, coyotes and even bears, are the animals that would attack a horse.

Keeping animals on your property can be very dangerous, especially when you know that in your area there can be a lot of predators. You have to understand the types of threats so you could protect your animals better. Bears are well known for being tough predators. Both Black and Grizzly bears can attack horses and riders. Bear attacks on horses when the horse and rider accidentally come across one on the trail. Cougars or mountain lions are cunning predators. They like to ambush their prey, and they’re not found as widely as bears, but in certain areas, they’re known to be quite dangerous. You should know that humans and horses are very rarely attacked by mountain lions, bears. These animals avoid humans but you don’t know what could happen. Wolves attacks are not that common. They usually attack farms at night, when horses are in their stables. They attack, kill and even eat horses they have killed.

How big of an animal will a coyote attack?

Coyotes will attack and kill different animals, the small ones and even the bigger animals.

Coyotes will attack and kill pets, especially cats and small dogs (less than 25 pounds). They can attack animals that are bigger than them, such as horses. Even the attacks on horses are less common, but they do attack and kill or even eat horses. Coyotes attack farms at night when horses are unattended in pens, corrals, or pastures. Your pets and animals should be kept indoors, particularly at night, and small dogs should be on a leash and under close supervision at all times.

Will horses keep coyotes away?

Some horses do tend to be territorial and any territorial animal will show some agresion. The thing that could decide whether the horses will keep coyotes away is the number of the horses or the group, because when alone the horse will instinctively run away.

Horses tend to flee first, mostly proto horses, because they evolved on steppes they are . They can see danger coming from a long distance and are most successful by simply running far enough that predators at the end give up. However, horses do tend to be territorial and any territorial animal is going to be wired to have at least some aggression, if only towards their own species.it isn’t too big a leap for the territorial aggression to be occasionally directed at predators, as well.

Can a horse kill a coyote?

It’s a rare case to hear that a horse killed a coyote. It’s possible because horses are much bigger and stronger than coyotes.

Horses are prey animals. They are not predators, so they can attack or at least fight back. Their instinct is to run away, to avoid the danger situation they are in. but that doesn’t mean they can’t hit or even sometimes fight back. Of course it could be lethal for the coyote if the horse decides to throw a kick and fight back, because a 1000 pound animal is huge compared to a 40 pound animal.

Every mentioned animal is dangerous and can attack or even kill.

The differences are usually the strategy and the way these animals attack. Approaching the territory of every single one could be dangerous for the rider and the horse. Some of the animals as the cougar wont attack humans, so the rider will be safe. But that doesn’t mean that sometimes the attack won’t happen. In most of the cases these animals attacked or even killed the prey animal. Coyotes and wolves will always attack at night when the horses are at their stables. While a cougar or mountain lion will attack you and your horse when you approach their territory. Or when you ride along a trail and by accident cross in front of a mountain lion.