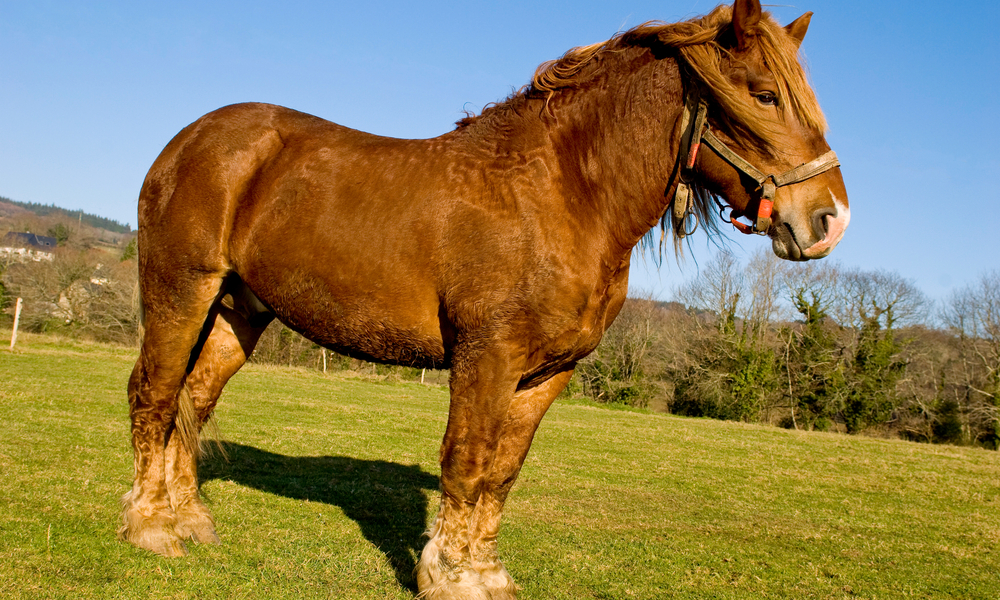 The Breton is a smaller draft horse from France that has been used for centuries as a working horse.

Read on to learn more about this fascinating breed!

Here are some of the key things you need to know about the Breton horse:

The Breton mountains in France are the birthplace of the Breton horse, but it is not known how horses arrived in the region in the first place.

According to one theory, these horses date back to before 2000 BC and were brought to Europe by migrators from Asia.

Another belief is that they were originally bred and developed by Celtic warriors.

In any case, it is assumed, and generally agreed upon, that they descended from the steppe horses that the Celts used for transportation and riding.

Some of those ancient Breton ancestors were crossed with oriental horses during the Crusades, which made them desirable military horses in the Middle Ages.

During those times different Breton breed styles were developed, including a light riding horse and a heavy draft horse.

The 1900s saw a continuation of the practice of crossbreeding, during which time Arabian and Thoroughbred blood was used in an effort to create a new breed type.

A variety of horse breeds, including the Ardennes, Boulois, and Percheron, have been crossed with Breton horses throughout history.

However, beginning in the 1930s, rigorous programs of selective breeding have been implemented, which have been successful in putting an end to the widespread practice of crossbreeding.

Breton horses have remained smaller than many other draft breeds due to a greater emphasis on maintaining the purity of the breed.

Horse breeders have worked hard to create horses that can withstand harsh conditions while still providing the power of a traditional draft horse.

Despite the fact that a stud book for this breed was established in 1909, it was formally closed only in 1951.

All breed types are still registered together, however only horses born in Brittany or the Loire-Atlantique region may be registered.

The body is large and well-built with a medium, squarish head and a broad forehead.

The face is usually straight but can sometimes be dished as well.

The neck is short, robust and well-conformed.

The back is short and wide, and legs are well-muscled.

The height of a Corlay Breton may range anywhere from 14.3 to 15.1 hands, making it a smaller type of the breed.

It possesses draft characteristics, but its smaller size is a result of its Arabian and Thoroughbred ancestry.

The Hackney and the English Norfolk Trotter both had an impact on the development of the Postier Breton.

It stands at an average height of 15.1 hands, and because of its lighter body, it is an excellent carriage horse.

The Trait Breton is the biggest type, also known as the heavy draft type.

It is influenced by larger draft breeds such as the Ardennes and the Percheron, and its height ranges from 15.2 to 16.2 hands high.

Due to its shortened legs, it is not very tall but has considerable strength.

Mostly chestnut with flaxen manes and tails, but also bay, roan, and grey

Because of the existence of multiple breed subtypes, the Breton is quite versatile.

They are still used for farm work, but you can find the Breton working as a carriage horse, a riding horse, or for meat production.