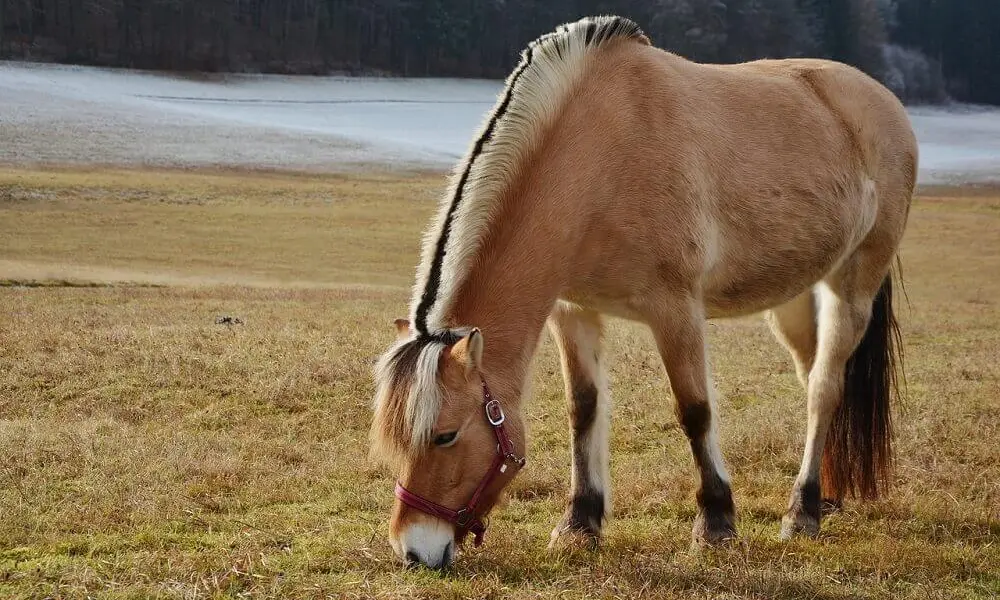 This horse is a descendant of the horses that were used by the Vikings.

They are friendly horses that make great trail horses.

Because they come from such a cold climate, they handle winter weather well.

If you’re interested in learning more about this unique breed, keep reading!

Here are some of the key things you need to know about the Fjord horse:

The Fjord horse’s pure genes may be traced back at least 4,000 years, making it one of the world’s oldest breeds.

The Norwegian Fjord horse is similar in appearance to the wild Asian Przewalski horse, with which it may have a common ancestor, although it is even more genetically closely related to the extinct Tarpan horse.

Domestication of the breed likely occurred in Norway many thousands of years ago.

The Norwegian Fjord horse was used by the Vikings as a war horse, but the sturdy build made it good for farming in later years.

The Icelandic horse and the Highland Pony, which both have similar conformations, were probably influenced by very early Fjord horses who traveled with the Vikings to Iceland, Scotland, and other places.

There were attempts to cross the Fjord with the Dole, another Norwegian breed, but in 1907 it was determined that this experiment had been unsuccessful.

As a result, Dole blood was quickly removed from Fjord bloodlines.

Fjord Horses have been selectively bred over the course of the last two thousand years.

When compared to other horse breeds, the Norwegian Fjord horse has one of the oldest histories that has not been diluted by interbreeding.

It is regarded as Norway’s national breed.

The first stud book was created in 1910.

The head is of medium-size, with a flat forehead and flat or slightly dished profile.

The eyes are expressive and large, and the ears are small.

The neck is heavy, arched and made more prominent by roached mane (a mane trimmed short to produce a bristling crest).

The back is short.

The croup is broad, sloping and well-muscled.

The legs are strong with some feathering.

The color of all Fjord horses is a shade of dun.

A ‘kvit’, sometimes known as a white horse, is a kind of horse that has a cream-colored coat and blue eyes, rather than the brown eyes that are more common.

This type of horse is produced by a special genetic combination.

Many have primitive markings such as a vivid dark dorsal stripe in the middle of the mane or tail, zebra striping on the legs, striping on the withers, and little circular marks on the cheeks or thighs called ‘njål marks’.