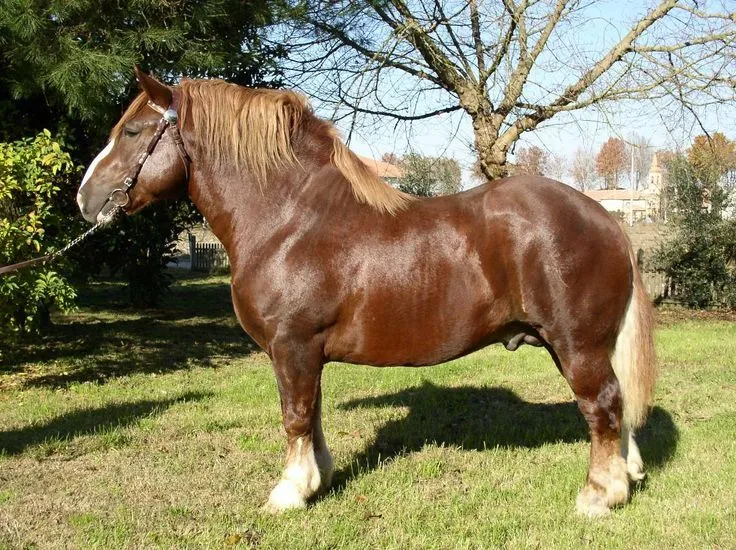 It used to be bred for farm work and military use, but today it is mostly bred for meat production.

Read on to learn everything about this powerful breed!

Here are some of the key things you need to know about the Italian Heavy Draft:

The Italian Heavy Draft, sometimes known as the Rapid Heavy Draft, is a breed of draft horse that was developed in Italy.

The breed’s evolution began in 1860 and proceeded through the late 19th and early 20th centuries as breeders used a combination of foundation bloodstock, including local Italian stock and imported horses, all mostly of the draft type.

Military stud Deposito Cavalli Stalloni in Ferrara started crossing Breton stallions with mares from the northeastern Italian plains in the 1860, marking the beginning stages of the breed.

These mares came from a wide variety of genetic backgrounds, including Hackney, Belgian Draft, and Breton.

The Italian Heavy Draft breed developed with its own distinctive traits via repeated crossbreeding of those same lineages.

The studbook was established in 1926, and the population grew steadily until the outbreak of World War II.

As the necessity for draft horses declined due to the rise of machinery, breeding programs suffered and, despite post war efforts, their numbers continued to decline.

In the 1970s, the objectives of selective breeding were shifted in order to create a horse that was appropriate for the production of meat, which is still the principal usage of the Italian Heavy Draft horse today.

Gentle and easy to train

The head is relatively small for a draft breed, and features a straight or slightly convex profile.

The neck is short, muscular and broad, and is set to pronounced withers.

The chest is deep and broad, and the shoulders sloped.

The back is very short, and the croup is round and sloped.

The legs are short, with broad joints.

The hooves are tough and well-formed.

Most commonly chestnut usually with flaxen mane and tail, but red roan and bay are also seen. White markings on the face and legs are allowed.