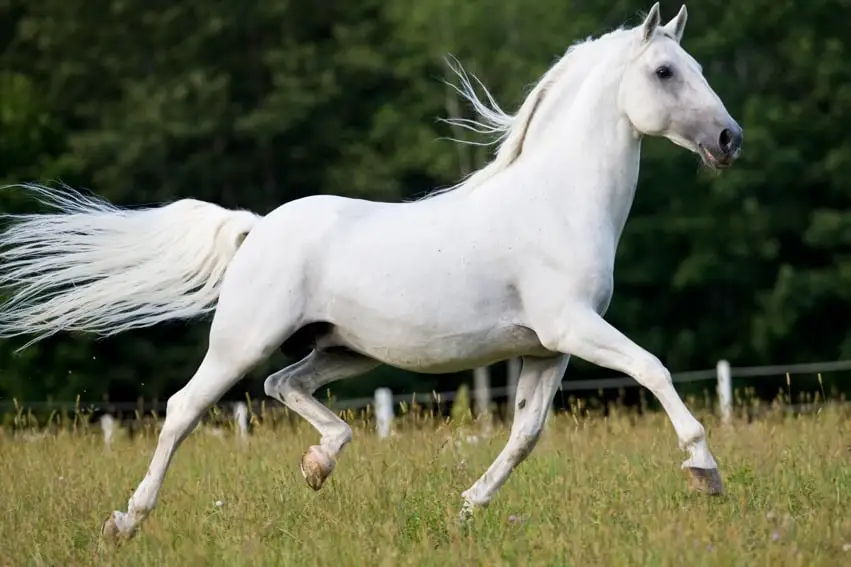 The Lipizzaner’s name was derived from the location in which it was first bred in 1580, the Imperial Stud at Lipizza, near Trieste. The Lipizzaner is the horse of preference for the famous Spanish Riding School of Austria. Only superlative stallions which are light gray to white in color are considered for training, which they begin at the age of five.

Those stallions which demonstrate excellence at the school are eventually retired to stud at Piber, the government farm were modern Lipizzaners are bred. Those individuals not suitable for the school often become excellent hunters, three-day-event horses or driving horses. The Lipizzaner’s ancestors include the Arabian, Neapolitan, Barb, Andalusian and Kladruber.

It has a relatively large head with small ears, dark, expressive eyes and often a convex nose which is reminiscent of its Spanish ancestry. The body is compact with smooth musculature and substantial shoulder. The legs are short and clean, with small, hard hooves. Longevity is a common characteristic since the breed matures late. Noted for his sturdy body and proud carriage, the Lipizzan’ head is remarkable for its large appealing eyes and small alert ears. The body presents a picture of strength with a crested neck, powerful shoulders, muscular hind quarters, and strong legs with well-defined tendons and joints.

The ancestors of the Lipizzaner can be traced to approximately A.D. 800. The earliest predecessors of the Lipizzaner originated in the 7th century when Barb horses were brought into Spain by the Moors and crossed on native Spanish stock. The result was the Andalusian horse and other Iberian horse breeds.

By the 16th century, when the Habsburgs ruled both Spain and Austria, a powerful but agile horse was desired for both military uses and for use in the fashionable and rapidly-growing riding schools for the nobility of central Europe. Therefore, in 1562, the Habsburg Emperor Maximillian II brought the Spanish Andalusian horse to Austria and founded the court stud at Kladrub. In 1580, his brother, Archduke Charles II, established a similar stud at Lipizza (now Lipica), located in modern-day Slovenia, from which the breed obtained its name.

Kladrub and Lipizza stock were bred to the native Karst (Kras) horses, and succeeding generations were crossed with the now-extinct Italian horse breed Neapolitan and other Baroque horses of Spanish descent obtained from Spain, Germany, Denmark. While breeding stock was exchanged between the two studs, Kladrub specialized in producing heavy carriage horses, while riding and light carriage horses came from the Lipizza stud.

Beginning in 1920, the Piber stud, near Graz, Austria, became the main stud for the horses used in Vienna. Breeding became very selective, only allowing stallions that had proved themselves at the Riding School to stand at stud, and only breeding mares who had passed rigorous performance testing.

Inbreeding can cause melanoma.

Lipizzans have starred or played supporting roles in many movies, TV shows and books. The World War II rescue of the Lipizzan stallions is depicted in the 1963 Walt Disney movie Miracle of the White Stallions. In the film Crimson Tide, a discussion between the two protagonists over whether Lipizzans came from Spain or Portugal is used to represent the film’s suppressed racial conflict and the dividing of the world between the two main powers during the Cold War.