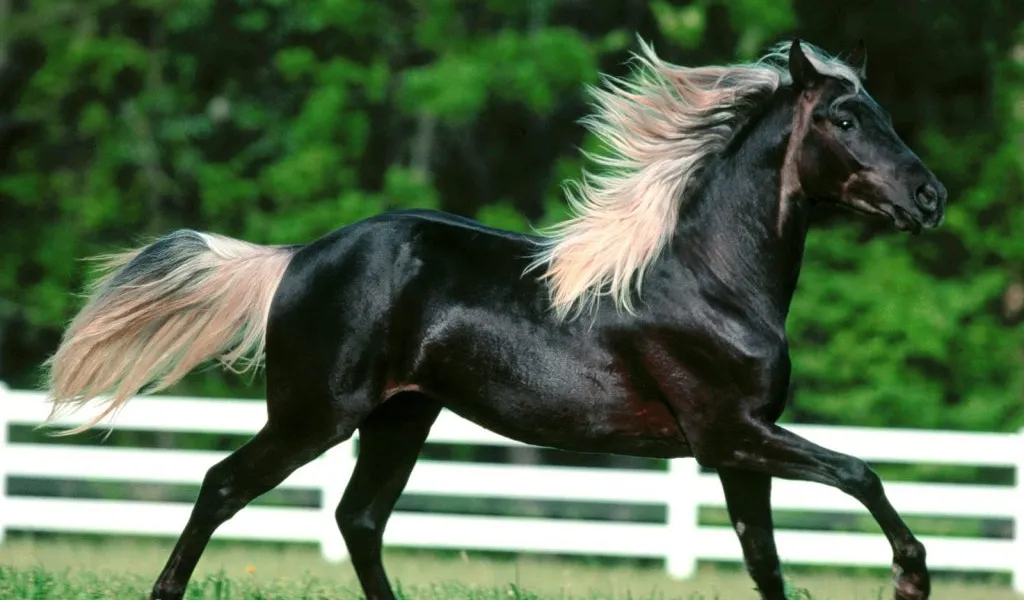 The Rocky Mountain Horse is a North American horse breed that is known for its sure-footedness and ability to handle difficult terrain.

They are also said to be calm, good-natured, and easy to train.

If you’re thinking about getting a Rocky Mountain Horse, here’s what you need to know.

Here are some of the key things you need to know about the Rocky Mountain Horse:

In addition, American Saddlebreds, Tennessee Walking Horses, and Missouri Fox Trotters all descended from the same mixing of Spanish and English blood and originated in the same geographical region of the United States.

Origin of The Breed

Both the Rocky Mountain Horse and the Kentucky Mountain Saddle Horse have a similar ancestry, and the two breeds are frequently referred to together as “Mountain Pleasure Horses”.

Oral traditions claim that the “Rocky Mountain Horse”, as he was called, was brought to the region as a colt and could perform the single-footing pace, had desired chocolate color, and flaxen mane and tail of the breed today.

He was used in a small geographic area on local saddle mares, and thus a local strain of horse originated.

This foundation stallion sired a descendent known as Old Tobe, who became the contemporary father of the Rocky Mountain Horse breed.

Old Tobe was owned by Sam Tuttle, who was recognized as a leading breeder of Rocky Mountain Horses through most of the 20th century; even keeping the breed alive during the Great Depression and World War 2.

Following the end of World War 2, Tuttle kept his herd and continued using Old Tobe as a breeding stallion, despite the fact that the number of horses in the United States was decreasing.

Tuttle owned the horseback riding concession at Natural Bridge State Park and utilized Old Tobe for trail rides, and breeding; the latter until the stallion was 34 years old.

Tobe died when he was 37 years old.

The breed was initially created for general usage on farms in the Appalachian foothills, where it was hauling plows and buggies, working cattle, and being ridden by both adults and children.

The first batch of horses to be registered comprised just 26 individuals.

Since then, the association has registered over 25,000 horses, and is today present in 47 states and 11 countries.

A foal’s paternity must be validated by DNA testing before it can be approved by the registry.

In addition, after a horse reaches the age of 23 months, it is required to undergo an examination to determine whether or not it satisfies the physical characteristic and gait standards of the breed.

The American Livestock Breeds Conservancy has given the Rocky Mountain Horse the “Watch” status, which indicates that the breed’s estimated worldwide population is less than 15,000 individuals, and that less than 800 individuals are registered with the organization each year in the United States.

The breed’s stride and temperament make it popular with elderly and handicapped riders.

The International Rocky Mountain Horse Show is held annually in September at the Kentucky Horse Park.

The Rocky Mountain Horse was developed from a variety of different breeds, and thus its physical appearance varies greatly.

Some horses have characteristics that are distinctly Spanish, while others more closely resemble bigger, more modern breeds.

The Rocky Mountain Horse has a reputation among breed aficionados for its toughness and ability to survive the harsh winters that are common in mountainous regions.

Additionally, it is praised for having a pleasant demeanor and a natural affection for people.

The breed performs a natural four-beat ambling gait, called the single-foot, which replaces the trot.

Because the horse always has at least one foot on the ground, the additional footfalls provide more smoothness for the rider.

The value of this pace is also the conservation of energy as the horse travels.

A Rocky Mountain Horse can carry a rider over rough terrain at about 7 miles per hour (11 km/h).

Overall, there are more than 30 horse breeds that are gaited, and on top of that some of them can also trot.

All solid colors are permitted, however, chocolate of varying shades with a flaxen mane and tail is the most popular.

This color is caused by the very uncommon silver dapple gene acting on a black base coat.

The Rocky Mountain Horse is one of over a dozen breeds that have been confirmed to have this gene.

The registry allows minimal white markings, and leg markings must not reach above the knee.

This non-progressive illness is characterized by the abnormal growth of specific ocular tissues, which impairs vision, but often in a moderate form.

Since the silver dapple gene is present in the majority of horses with MCOA, genetic tests conducted in 2008 have shown that the condition may be linked to this gene.