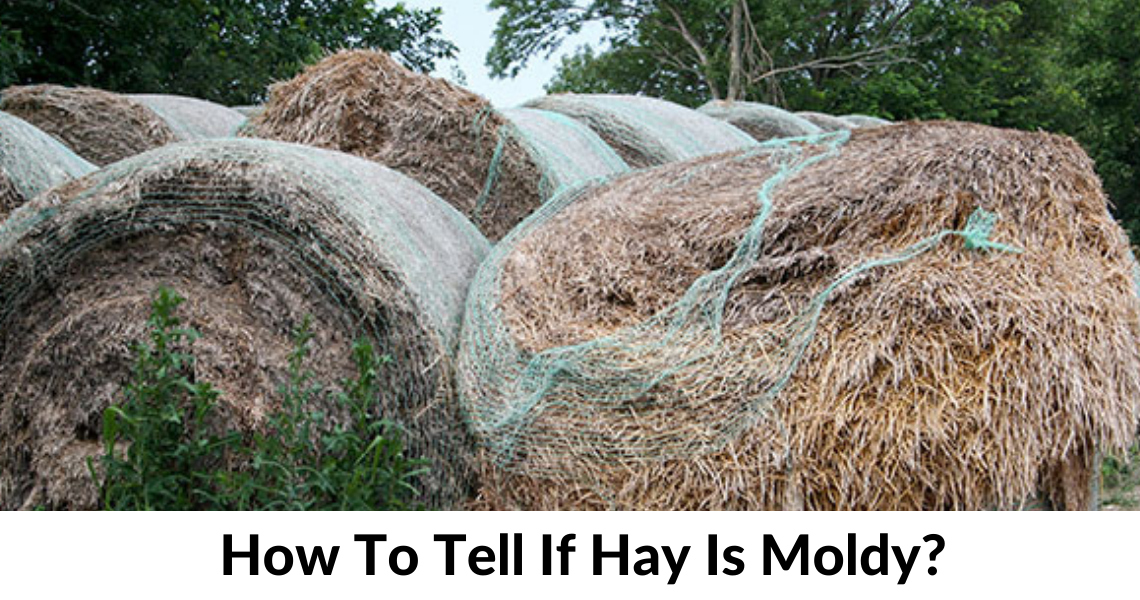 Hay can usually be kept for quite a long time, given that it was stored properly, but there are certain things to be careful about, including moldy hay. So, how to tell if hay is moldy? Usually, you can say if hay is moldy through the looks and smell of it. Moldy hay will definitely have the odor of smell which you can recognize if you have ever had anything moldy in your fridge. Also, moldy hay will have gray or black shades, so by looking at it you can determine if it is moldy. Another way to put it to a test is through cutting the strings, so if it expands it is a pretty good sign that this hay is good. However, if you cut the strings of a bale and it remains set it is more likely than not that this hay is moldy.

Can hay get moldy?

Yes, hay can get moldy. Mold grows on many organic compounds as a part of a very natural process, so be careful as it occurs gradually. As you probably know, hay is simply grass that has been left on the sun to reduce the amount of water which is a natural component of grass. After a period of time, hay will be collected and stored so horses and other animals can eat it during the seasons in which fresh grass in pasture is not available. However, if there were a lot of rainy days while grass was left out to reduce the amount of water, it can retain a significant proportion of water and get moldy in the process.

How do you know if hay is bad?

Hay represents a significant portion of any horse’s diet so it wise to pay close attention to hay quality. As an average person, you might wonder how do you know if hay is bad? There are a few signs which tell you if hay is of questionable quality. As a first test look at the color of hay. Hay should have greenish color, but if the color is more grayish or even black in spots then it is definitely better to avoid this hay. Also, if it is too white at spots it might be a sign that it has been left on the sun for too long, so even though it might not be bad it lacks nutrients. Second test is if it smells of hay. Hay should have a sweet smell, but moldy hay has a smell of mold. Also, hay should not be covered with dust excessively as this can also cause problems to your horse, so make sure bales and flakes are inspected carefully and dust is removed.

Can a horse eat moldy hay?

The answer to the question can a horse eat moldy hay depends on whether you ask if the horse would reject moldy hay or if he would be fine after eating it. So, the answer to the first interpretation of this question is yes, horses would eat moldy hay, even though it is not good for them. Thus, do not rely on the horse’s instinct to avoid harmful foods as sometimes horses are that hungry that they will eat pretty much anything. When it comes to the question is it ok for horses to eat moldy hay answer is no, definitely no. There are several negative consequences if horses eat moldy hay, some of them very serious so please make sure that your horse stays away from moldy hay.

There might be some hay left from last year and you may wonder should you use it or throw it away. A year old hay can be perfectly fine for your horse, but you have to check it carefully before you decide to feed it to your horse. The main thing you want to check is that it is free from any mold. If the hay passes a mold test then check if it is free from dust and any other dirt like feces or urine. Generally, a year old hay that was stored properly will be perfectly fine for your horse, but once again, it had to be stored and kept properly.

How do you keep hay from going Mouldy?

There are several ways in which you can keep your hay safe from mold and other contaminators. The number one thing you should take care of is to keep hay away from any type of moisture. First test is to look inside a bale to check if there is water inside as this can lead to fermentation which builds temperature inside the bale and can cause fire. If bales were cured properly then your next step is to make sure no water from outside gets in contact with hay. If bales are kept inside make sure bales are not placed under leaking roof. It is a very good option to keep bales on wooden palettes rather than on bare ground because of moisture. Also, make sure you place bales in such a formation so they will have enough space from walls and roof as air circulation is very important for keeping hay in good condition.

Will moldy hay kill a horse?

Essentially it depends on the amount of moldy hay that a horse has eaten, but yes, moldy hay can kill a horse. Moldy hay can cause colic, respiratory diseases and death. It is also important what kind of mold is present. With mixed mold types, there is usually less of a problem. If you, however, have a large amount of a single penicillium, fusarium or aspergillus mold, the risks to your horse are higher. As all of these problems caused by moldy hay can develop into some more serious diseases and even death, always be careful with the type of hay you feed to your horses. Poisoning from mycotoxins in moldy hay is very serious and thus be careful with any suspicious look or odor on hay.

Is white mold on hay bad for horses?

To answer the question is white mold on hay bad for horses one has to know white kind of mold is it. In general, mold is bad and should be avoided since it causes respiratory diseases and colics. However, sometimes there is no good quality hay around than horse owners will feed moldy hay to horses in a way that they will separate all of the moldy parts from the regular hay.

What happens if your horse eats moldy hay?

What happens if your horses eat moldy hay depends on the amount they ate and the type of mold they ate, so consequences can vary from very mild to severe. Always inspect hay closely; you can read more about this under section “How do you know if hay is bad”. In case your horses get in contact with mold whether through inhalation of spores or through eating moldy hay you should pay close attention to your horses’ state. Moldy hay can cause breathing problems, colic, bloody stool, birth defects in pregnant mares. In more severe cases horses can have severe fever, liver and kidney failure and death. Thus, if you suspect your horses have eaten moldy hay pay close attention to their behavior and contact the veterinarian promptly.

Can moldy hay cause colic in horses?

Moldy hay can cause many different issues with horse’s health including colic. Given that moldy hay contains fungi spores that are dangerous for horse’s digestion and general health, it is always good to closely inspect any part of hay that you feed to your horses. Although mold grows easily in any hay and most hay contains some mold, it is up to every horse owner to inspect hay carefully and to decide whether or not to feed hay that might contain mold. The best thing you can do for your horses is to take all precautions so your horses do not get in contact with moldy hay.